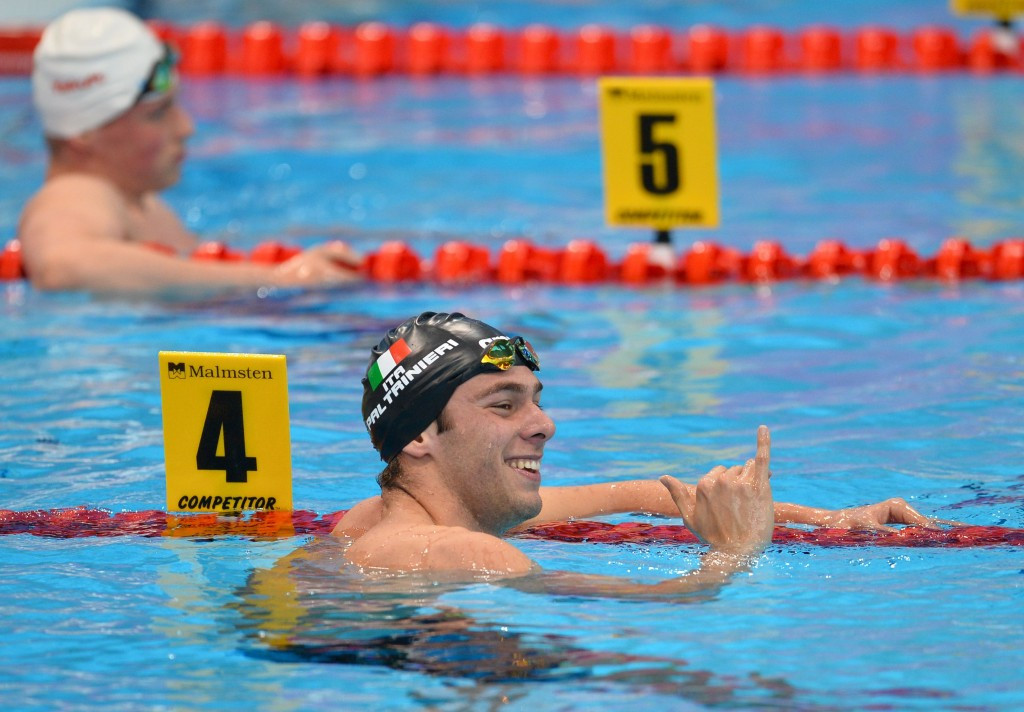 Italy’s Gregorio Paltrinieri swam the second-fastest men’s 1,500 metres time in history to secure European Aquatics Championships gold on a night where world champion James Guy of Britain was forced to settle for bronze in his preferred 200m freestyle event here.

Lithuania’s Rūta Meilutytė had no such trouble as the London 2012 Olympic gold medallist asserted her dominance in the women’s 100m breaststroke to earn partial retribution for a surprise second-place result at last year’s World Championships in Kazan.

The best performance of the third day of finals came in the opening race of the night as Paltrinieri clocked a superb 14min 34.04 sec to comfortably add the European title to the world crown he won in Kazan last year.

The display from the 21-year-old laid down a marker to the rest of the athletes in the category ahead of the Rio 2016 Olympic Games, where the Italian looks to be one of the favourites for gold.

His time was second only to the world record of 14:31.02, set by China’s Sun Yang during his Olympic gold medal-winning display at London 2012.

Paltinieri’s nearest challenger here tonight was over 14 seconds adrift of his formidable effort as team-mate Gabriele Detti clinched silver in 14:48.75.

Bronze in the event, the longest distance on the programme, went the way of Ukraine’s Mykhaylo Romanchuk of the Ukraine.

“First of all, this time is incredible,” Paltinieri said.

“I can’t believe I was able to swim here so far as we have been working very hard in training.

“This is good for my confidence because my goal is a gold in Rio.”

Britain’s Guy was hoping to harness the energy inside the venue but was unable to give the fans the result they wanted as he claimed bronze in the 200m freestyle.

The home hope was stunned by an electric race from Sebastiaan Verschuren of The Netherlands, who earned his maiden European title in a time of 1:46.02.

Velimir Stjepanovic of Serbia was the recipient of the silver medal as he finished 0.24 seconds behind the Dutchman, with Guy completing the podium a further 0.16 back.

Meilutytė was another hot Rio 2016 prospect in scintillating form as she won her favoured 100m breaststroke - an event in which she remains the world record holder - in 1:06.17 to finish 0.28 clear of second-placed Hrafnhildur Lúthersdóttir of Iceland.

The Lithuanian’s time was a mere 0.01 seconds slower than the Championship record she set during yesterday’s semi-final.

The result for the Icelandic swimmer saw her seal her first-ever medal at World Championships level as she pipped British debutant Chloe Tutton for silver.

Elsewhere on a thrilling night of finals, double world champion Sarah Sjöström of Sweden proved she has more strings to her bow than just the butterfly ahead of Rio 2016, securing gold in the women’s 100m freestyle in 52.82sec.

The Swede, who last night reigned supreme over one lap using her preferred butterfly stroke, touched the wall in front of Dutch pair Ranomi Kromowidjojo and Femke Heemskerk, silver and bronze medallists respectively.

Andreas Vazaios of Greece took the men’s 200m individual medley honours in a time of 1:58.18, leading the race from start to finish to record a deserved victory.

The 21-year-old clinched the European title ahead of Israel’s Gal Nevo, whose silver was his country’s first continental medal in the event, while Portugal’s Alexis Manacas Santos picked up bronze to ensure he leaves London with his maiden major podium finish.