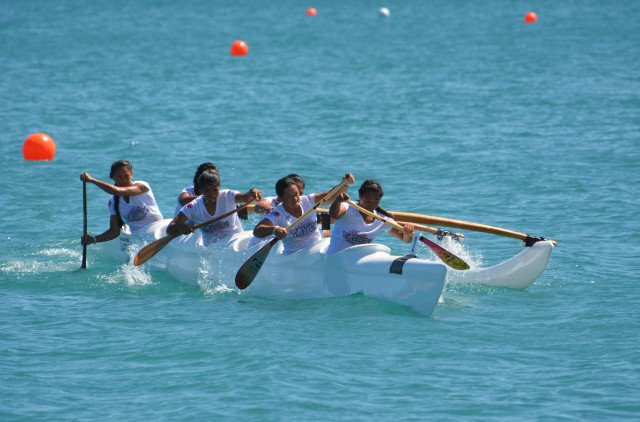 Tahiti were in outstanding form on the second full day of competition here at Port Moresby 2015 as they swept the gold medals in va’a and table tennis, while also claiming three Pacific Games shooting titles.

Their athletes completely monopolised the opening finals session in va’a, a popular sport in the region and one which Tahiti were expected to do well in, by successfully defending all four titles they won at the 2011 Games in Nouméa, New Caledonia.

Tahiti powered to victory in the women’s 1,500 metres V6 event, beating Cook Islands and Fiji, before the men followed suit shortly after, with the Cook Islands settling for silver once again while Guam clinched bronze.

The shorter distance races also went the way of the Tahitian team but they were pushed all the way in the men’s 500m V6, eventually crossing the line just 0.6 seconds in front of New Caledonia, who claimed silver.

Wallis and Futuna's bronze was their first medal of this year’s Pacific Games and they went on to repeat that performance in the women’s 500m V6, a race which saw Papua New Guinea win their only va’a medal of the day with silver behind the rampant Tahitians.

That total proved enough to beat Papua New Guinea’s Tania Mairi, second with 173.9, while Guam’s Amalia Duenas could not quite reach the gold medal shoot-off but managed to take bronze.

Gabriel Lan San built on the platform of Darius’ earlier triumph by clinching the men’s 10m air pistol crown as he beat Kevin Coulter of Norfolk Island to gold.

Coulter’s silver was his nation’s maiden Port Moresby 2015 medal and they had further success as Douglas Creek rounded off the podium in third.

Lan San finished the day with double gold as he helped Tahiti win the team event.

In a repeat of Nouméa 2011, the countries met in both finals, although the women were made to work much harder than the men.

Tahiti found themselves 3-1 down before launching a stunning comeback to win 5-3, while the men breezed to a confident 5-1 triumph.

"The girls played as a team and listened to all my advice," women's coach Mathieu Darrou said.

"They lost the first two games but had high hopes of completing the match, which they did, and came out champions."

Vanuatu added their name to the medals table with double bronze, proving too strong for Fiji with 5-2 victories in both events.