To complement the Father's Day pin issued last year, London 2012 have issued a Mother's Day pin in advance of March 18th, the day on which it falls this year.

The pin shows a bunch or pink roses and a pink London 2012 logo. The Father's Day pin was limited to 2,012 pieces and I would assume the same for this pin too.

The final pins are large, medium and small versions of a printed Union Flag logo. 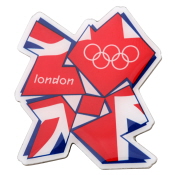