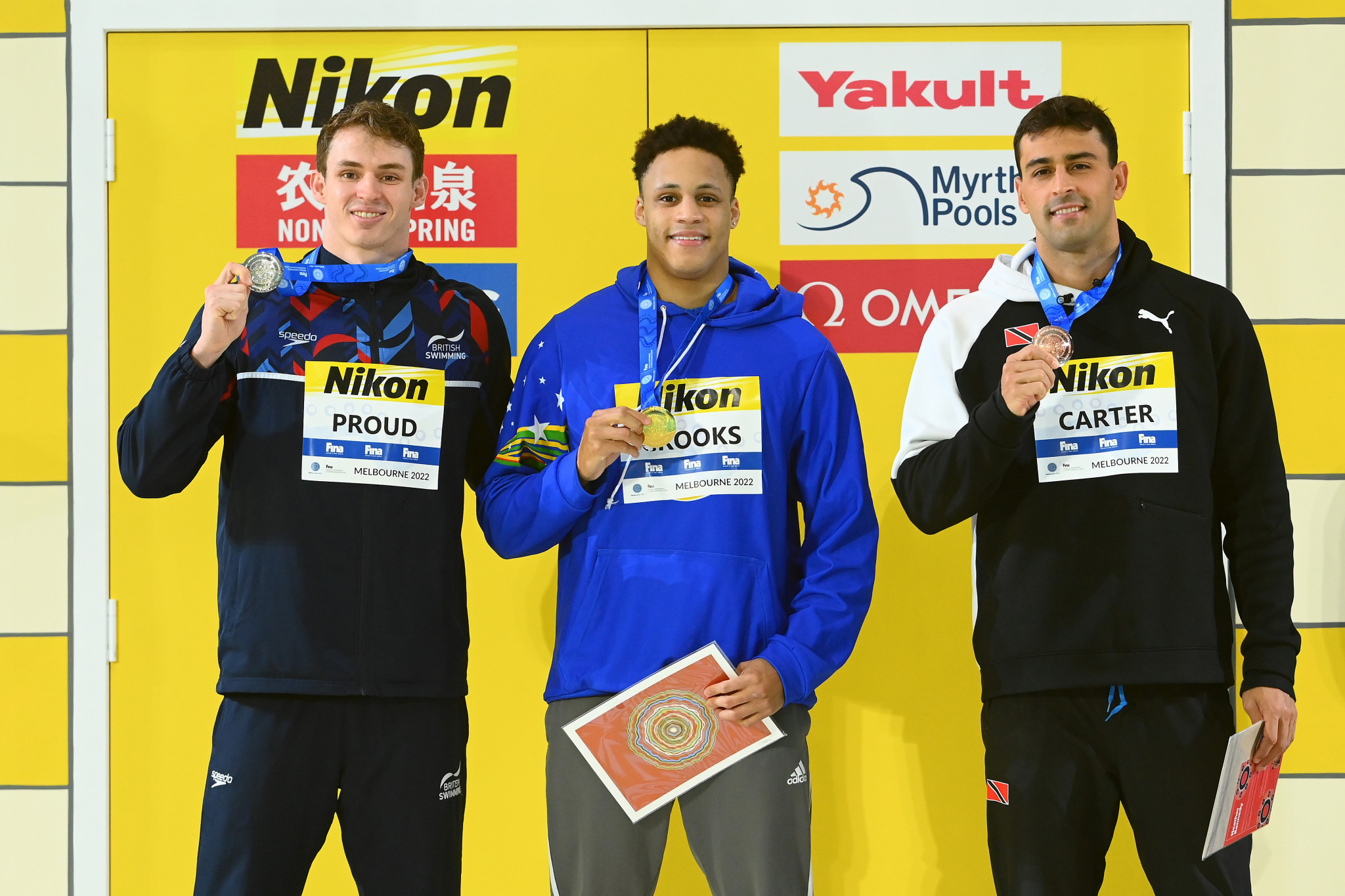 It was a stunning swim from Crooks who overcame the likes of British defending champion Ben Proud and Australia's Olympic champion Kyle Chalmers to make history at the Melbourne Sports and Aquatic Centre.

Crooks grew up training in a 25m pool in the Cayman Islands and looked completely at home as he powered to victory in a time of 20.46sec, beating Proud by just 0.03.

There were two Caribbean nations on the podium as Dylan Carter clocked 20.72 to seal bronze for Trinidad and Tobago.

The Cayman Islands has a population of just 70,000 people but Crooks said his success proved that anything is possible.

"I definitely had a bit of fire in me I wanted to come and show my hand in finals and I am very happy with how it played out," said Crooks.

"I think it means a lot.

"The Cayman Islands is a very special place.

"I wouldn't have grown up in any other place.

"I am very grateful for everything they have done for me as a person and swimmer.

"I grew up doing short-course metres so this was like going back home.

"I hope it shows any little kid out there that may doubt themselves and may think that because they don't have a specific resource that they might not be able to do it that it is possible.

"There is no set way of doing things, you can carve your own path."

World records have been tumbling over the past few days and today was no different with Australia and Italy producing brilliant performances in the respective women’s and men’s 4x50m medley relay finals.

Australia and the United States were going at world-record pace with Chelsea Hodges and Emma McKeon keeping the hosts' nose in front.

Sweden were also in the mix and mounted an almighty challenge with Michelle Coleman pilling the pressure on Madison Wilson.

The men's 4x50m medley relay final was just as gripping as Italy saw off the challenge of the US to secure gold in impressive fashion.

Isaac Cooper gave Australia the early lead before Nic Fink came to the fore to put the US ahead after a superb breaststroke leg.

It was then left to Leonardo Deplano to seal gold for Italy in 1:29.72, beating their previous best by 0.10 to improve their world-record time.

Italy's Gregorio Paltrinieri captured his second gold of the tournament when he won the men's 800m freestyle crown.

There was little in the race over the first 16 laps with Paltrinieri, the winner of the men's 1500m freestyle, holding a slender lead against France's Logan Fontaine and American David Johnston.

The Italian then found an extra gear in the second half of the race, pulling ahead from his rivals to register a championship record of 7:29.99.

The women's 400m individual medley title was won by a dominant Hali Flickinger of the US.

Flickinger quickly hit the front and did not look back, opening up almost a four-second gap on nearest challenger Sara Franceschi of Italy.

Franceschi battled hard to cut the deficit but Flickinger won in 4:26.51.

After 🥉🥈it's time for the first 🥇 gold medal!

The silver medal went to Franceschi in 4:28.58, while a time of 4:29.03 saw Japan's Waka Kobori complete the podium with bronze.

Japan's Daiya Seto emerged victorious from the men's 400m individual medley to secure his second gold of the event and ninth in his career.

South Africa's Matthew Sates led the way over the first five laps before Seto started to go through the gears.

After hitting the front, Seto pulled clear of the field and was a convincing winner, triumphing in 3:55.57 to add to the gold medal he achieved in the men's 200m breaststroke.

There was more delight for Australia and McKeon when she came out on top in the women's 50m freestyle final to secure a fourth title in Melbourne.

McKeon touched the wall first in 23.04 for a championship record, as Poland's Katarzyna Wasick secured silver in 22.55 and Britain's Anna Hopkin clinched bronze in 23.68.

There was also a world record broken in the women’s 50m breaststroke as Lithuania's Rūta Meilutytė posted 28.37 in the semi-finals.