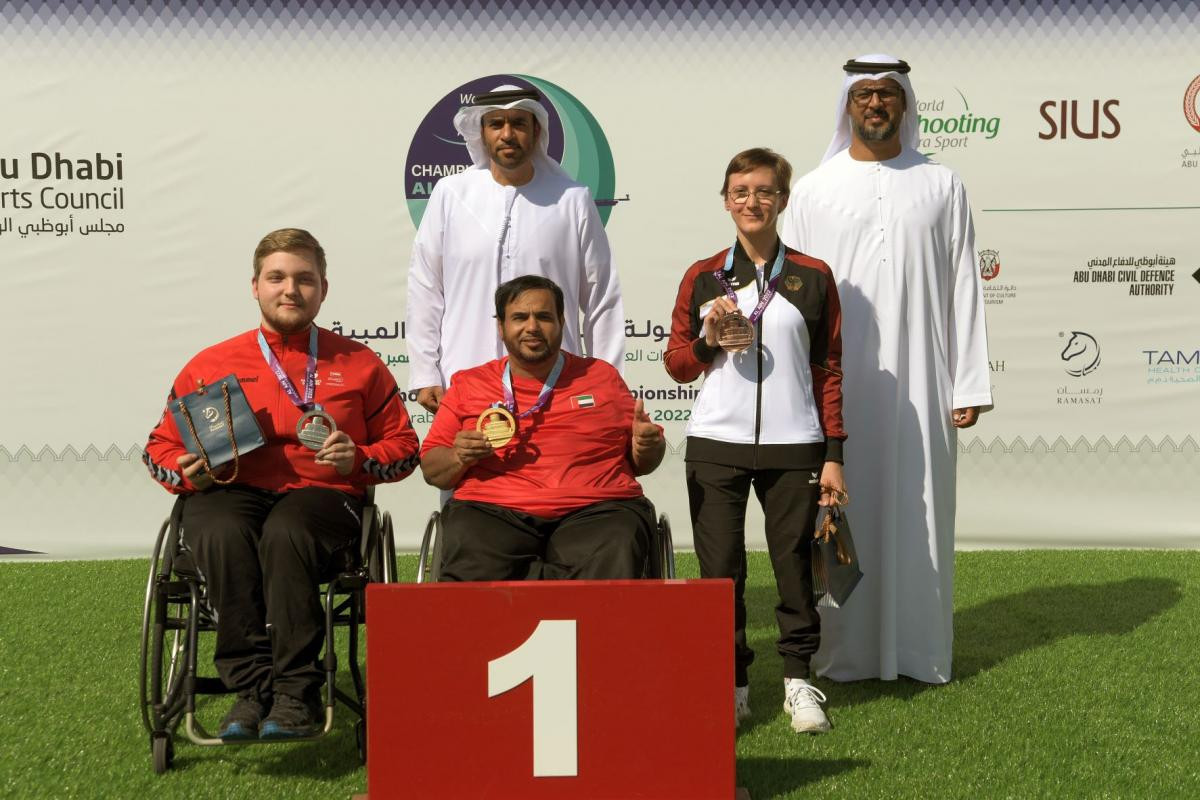 In the medal standings, South Korea finished top with six gold from 20 medals, followed by Ukraine with 13 medals including three golds; and Poland with six medals, of which three were gold.

Hosts UAE ended in eighth place with two gold from their four medals.

Some of the top shooters also booked quota places for their respective nations at the Paris 2024 Paralympic Games.

Alaryani, the Tokyo 2020 Paralympic gold medallist in R7, was a class apart as he led throughout in a thrilling final, overcoming strong challenges from eventual silver and bronze medallists Kasper Hjorth Lousdal of Denmark and Germany's Tokyo 2020 champion in R3, Natascha Hiltrop.

The home shooter earned himself and his country a second gold in the Championships with a score of 250.5 at the end of a dramatic final where Hiltrop went into the lead before a score of nine jolted her progress.

She eventually took bronze with 226.9, and Hjorth Lousdal's score of 247.9 earned him silver, his first medal at a World Championships and a quota place for Denmark.

The other quota place was earned by Great Britain's Matt Skelhon, who finished fifth on 185.9.

Jean-Louis Michaud finishes fourth, and now it's time to sort out that top three! 📊

In the team competition, Hiltrop along with Cliff Unker and Bernhard Fendt took the gold medal for Germany with a total score of 1844.2 points, ahead of Ukraine and South Korea.

Rio 2016 bronze medallist Aysegul Pehlivanlar and Cevat Karagol rallied from 6-12 down to equal the scores at 14-14 before winning 16-14 against compatriots Kusmus Tahayasin and Ozgan Aysel, the Sydney 2019 world gold medallist, in a thrilling final.

"We are very happy to win the gold medal," said Pehlivanlar.

"This is a great moment for our team Turkey."

The bronze medal was claimed by South Korea's Park Sea-kyun and Moon Aee-kyung  by defeating India's Manish Narwal and Rubina Francis, who staged a comeback but ultimately lost 16-12 in the play-off.

A total of 271 athletes from 54 nations competed in 27 medal events at the eighth edition of the World Championships in Al Ain.

Lima is due to host the next edition of the World Championships in 2023, from September 17 to 29 next year.