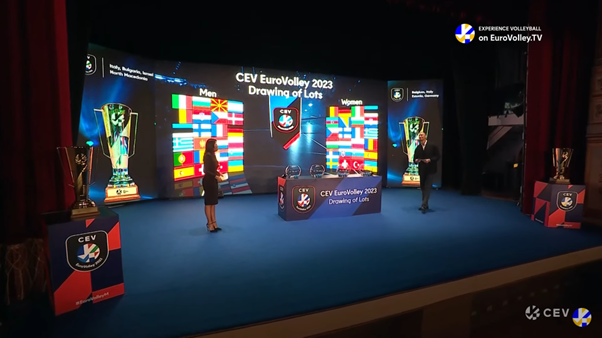 Defending men's and women's European champions Italy have discovered their first opponents for next year's competitions with Serbia and Bulgaria posing the toughest initial challenge.

The pool stage arrangements were decided at the European Volleyball Confederation (CEV) EuroVolley 2023 Drawing of Lots event here at the Palazzo Reale di Napoli in Italy.

In the men's draw, Italy was originally drawn into Pool A with Slovenia in what would have been a monumental clash as the two teams met in the 2021 gold medal match.

Instead, the co-hosts for next year's event are due to face their chosen opponent Switzerland, 2019 champions Serbia, 2017 runners-up Germany, Belgium and Estonia in a tough group.

As in previous years, the host nations have the right to choose one team to join them in the pool stage.

World champions Italy are due to host next year's competition from August 28 to September 16 alongside Bulgaria, North Macedonia, and Israel who selected Finland, Montenegro, and Romania to meet them in the round-robin stage.

Also in Pool B with Bulgaria and Finland is last year's runners-up Slovenia, Ukraine, Croatia, and Spain.

Prior to the men's tournament, the Women's European Volleyball Championship is set to be played from August 15 to September 3 in Belgium, Germany, Estonia and Italy again.

The latter, drawn into Pool B, are the favourites following their third triumph in the competition's history.

Davide Mazzanti's side will meet Bulgaria who are looking for a first podium finish since 2001, three-time runners-up from the 1990s Croatia, Switzerland, and Bosnia and Herzegovina who are making just their second appearance.

Hosts Belgium chose to go against Slovenia in Pool A and were then subsequently drawn against pot one's recent world champions Serbia, two-time European champions Poland, Ukraine and Hungary.

Turkey, who have made the podium in the last three editions of the Championship, headline Pool C while Germany look for a first title since 1987.

Azerbaijan are expected to be the weakest of the teams in the pool, with Czech Republic, Sweden, and Greece also featuring.

Although the Swedes are not expected to medal in the tournament, they have the Female Volleyball Player of the Year award winner Isabelle Haak on their side - who starred in Vakıfbank S.K.'s league and continental cup double-winning season last year.

The Netherlands went into Pool D from the first pot and are looking to repeat their 1995 triumph but will have to outplay France, Slovakia, Spain, Estonia, and Finland in the round-robin stage to give themselves the best chance.

The CEV is set to release the full match schedule soon after "careful consideration and discussion" with all of its stakeholders.