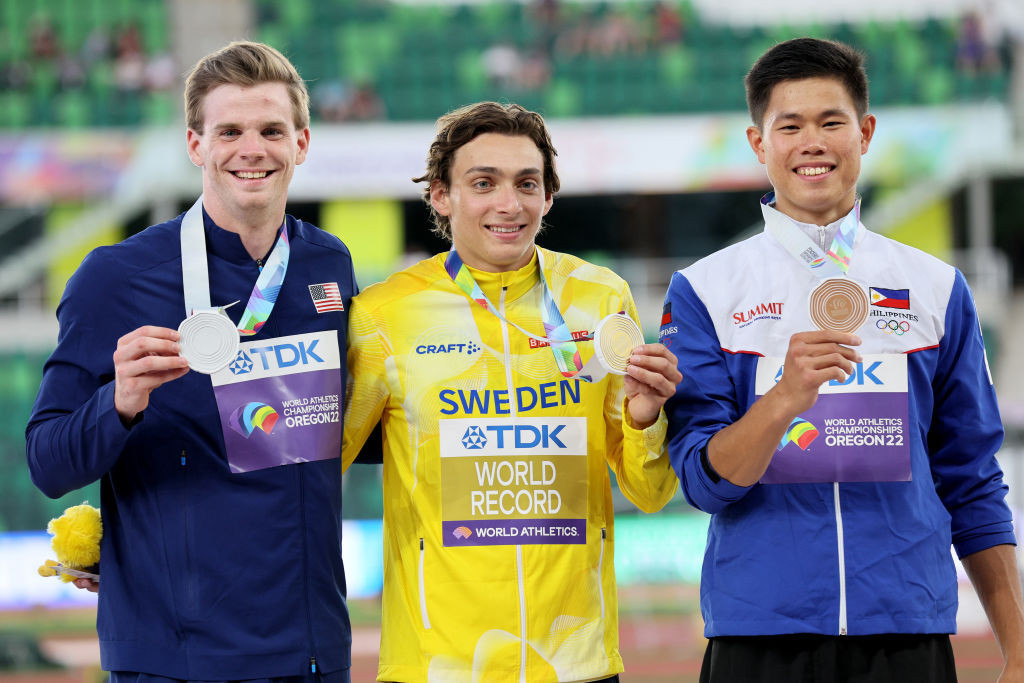 Victory in the final event of the World Athletics Championships in Eugene, the women’s 4x400 metres relay, strengthened the home domination of a medals table involving more countries than ever before at an event described by World Athletics President Sebastian Coe as "the greatest show on earth".

Significant broadcast and social media markers were also achieved as World Athletics’ US partner NBC reported with three days of ratings still to be reported that the Championships had reached more viewers - 13.7 million - than any previous edition.

Coverage on the NBC broadcast network for the first weekend – where there was an average of two million viewers - ranked as the most-watched World Athletics Championships since Osaka 2007 and represented a 159 per cent gain compared to NBC’s coverage of the 2019 edition.

But viewing figures were still lower than for last year's United States Olympic Trials at the same venue and yesterday's action was only the fifth-most watched sports programme of the weekend in America.

But, despite World Athletics claiming that they expected "all ten evening sessions to be full", there was clear gaps in the stands every night.

At least some in the US, however, fear that the World Championships may have been a missed opportunity.

"I feel the ball’s been dropped a little bit, not going to lie," Noah Lyles, who broke the 200m American record during the Championships, told The Washington Post.

"I feel there could have been way more advertisement on America’s side.

"This is an immaculate meet.

"This is by far the best track and field meet that America has had in years.

"And I’m watching these immaculate performances, and I’m like, 'The crowd is here, yes.

"'But gosh darn it was this not put together well.'.

"All the times are happening late at night.

"I’m still barely seeing much presence outside of what NBC is doing."

As Olympic and world 400m hurdles champion Sydney McLaughlin, who earlier this week took almost a second off her own world record in running 50.68sec, brought home the baton it took the United States to 13 golds, nine silvers and 11 bronzes, a Championship record.

The record for the number of countries winning gold medals at one Championships has been broken, with 29 countries earning at least one gold, compared with 26 in 2017.

A total of 45 countries featured in the medals table, with six – Barbados, the Czech Republic, Israel, Philippines, Puerto Rico and Switzerland – earning one bronze.

More than 1,700 athletes from 179 countries, plus the Athlete Refugee Team, have competed in Oregon, watched by almost 150,000 ticketed spectators, and producing three world records.

There has also been a record in terms of the number of countries with athletes reaching finals.

The list of 81 countries is up from 76 countries in Doha in 2019, with Liberia, Niger, Pakistan, Samoa, Philippines and Guatemala reaching a final for the first time in World Championships history.

Every continental area has supplied at least two world champions, while Peru, Kazakhstan and Nigeria have won their first ever gold medals – two in the case of Peru thanks to walker Kimberly Garcia Leon - and India and Burkina Faso also had their best ever medal performance in winning silver.

"Tonight we had a spectacular ending to a ground-breaking championships - with two world records and stunning racing in a passionate sold-out stadium to add the final flourish to the first world outdoor championships held in the USA," said Coe.

"This wouldn't have been possible without the hard work of our Local Organising Committee, the commitment of the state of Oregon and the local authorities, and the dedication of our Member Federations, officials and volunteers.

"I thank them all for making this an unforgettable world championships, but most of all I thank the athletes, who have once again put on the greatest show on earth."

The three world records came from McLaughlin, Tobi Amusan, who ran 12.12 in the 100m hurdles, and Mondo Duplantis, who pole-vaulted 6.21 metres.

There were a total of 13 Championship records, 19 area records, 92 national records and one world under-20 record.

World Athletics and parkrun have also combined to help the Eugene and Springfield communities in Oregon open parkrun events, as a legacy of the Championships.