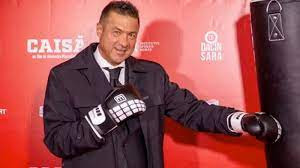 Former Romanian Boxing Federation President Rudel Obreja is set to be released from prison to receive treatment for cancer following a public appeal by the World Boxing Council (WBC).

Obreja, the former vice-president of the International Boxing Association, was sentenced to five years in jail in 2018 after being implicated in the "Gala Bute" case.

He was convicted of being involved in a case involving Romania’s former Tourism Minister Elena Udrea, who was sentenced to six years for corruption, including receiving bribes from an event in Bucharest in 2011 involving ex-world super middleweight champion Lucian Bute.

The event featured a world title match between Bute and French boxer Jean-Paul Mendy, which Obreja allegedly helped organise and Udrea illegally approved the financing of by the Tourism Ministry to have her name associated with it and get electoral benefits.

Obreja was sentenced for complicity to passive bribery four years ago, but did not start his sentence until last April while the appeals process was underway.

He has always denied the allegations.

"According to his family, Obreja, had been complaining of acute abdominal pain for three months," the WBC said on its website.

"Finally, he was taken to the hospital and was diagnosed with advanced cancer, an excessively late diagnosis due to the indifference of jail doctors and the poor and delayed response of the penitentiary system.

"In short, the WBC believes that Mr. Obreja’s right to life has been desecrated.

"The WBC places human rights above all other considerations.

"Accordingly, Mr. Obreja should be released immediately so he can receive adequate medical care and the support of his family.

"We urge the Romanian Government and all competent national institutions to take all appropriate measures to provide proper preparation in this case and to ensure that Mr. Obreja’s rights are respected, protected, and fulfilled."

Obreja, a former boxer and winner of a silver medal in the light middleweight category at the 1989 World Amateur Championships in Moscow, was the chief technical delegate for boxing at the 2008 Olympic Games in Beijing.

During the Games, Obreja alleged that some fights had been affected by bribery.

He led the Romanian Boxing Federation between 2004 and 2012 and in 2007 was appointed vice-president of AIBA, as the International Boxing Association was then known.

But Obreja came into conflict with AIBA, after they decided in 2011 to exclude the Romanian Federation for allowing fighters to box without any head protection in the Romanian Cup and because it tried to hide this by falsifying documents.