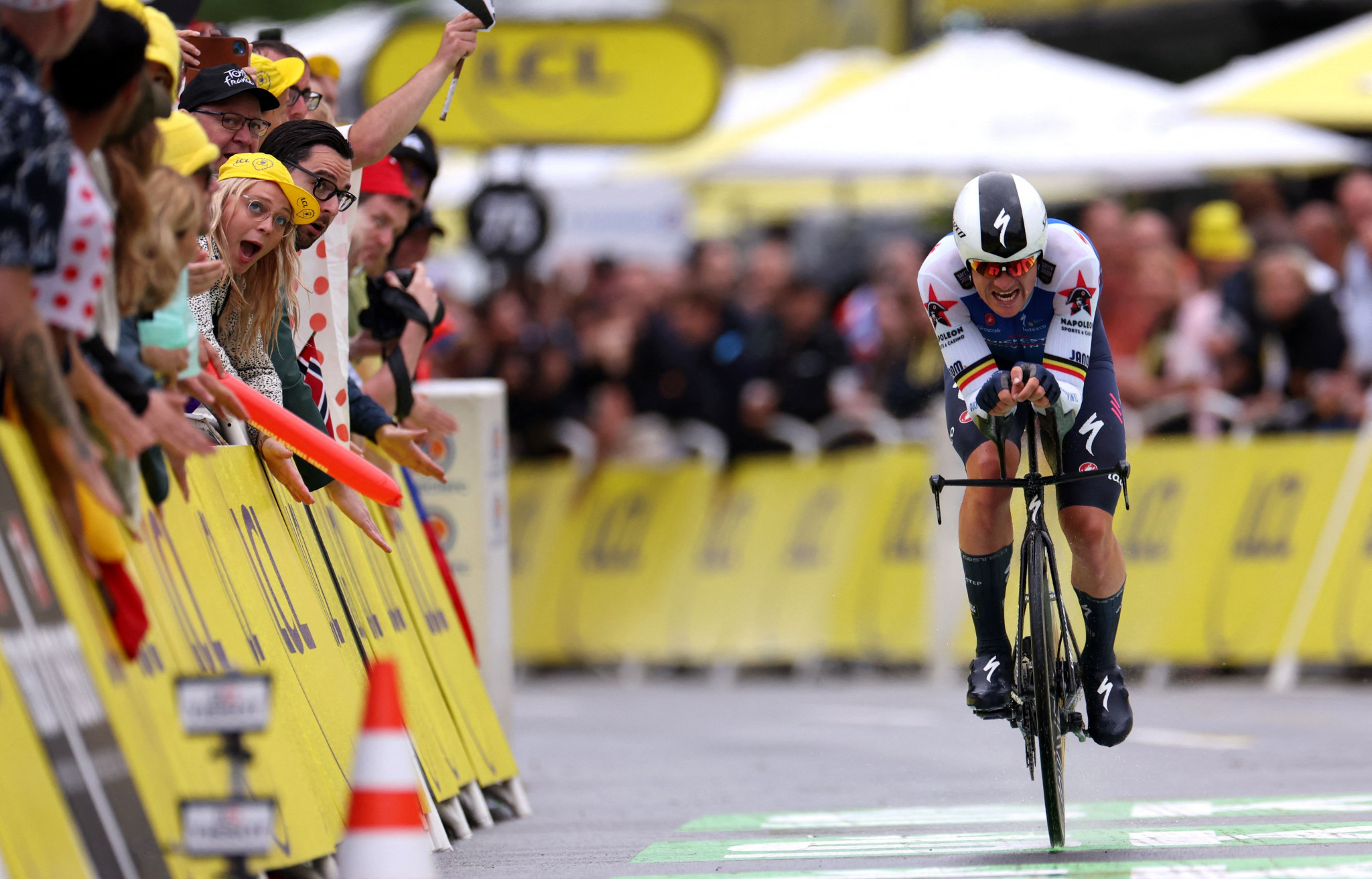 The Quick-Step Alpha Vinyl rider dealt magnificently with the slippery conditions in Danish capital Copenhagen as he stormed around the wet course of 13.2 kilometres in a time of 15min 17sec.

It was a shock victory for the 31-year-old whose previous best Grand Tour result came was a stage win at the 2017 Vuelta a España.

Fellow Belgian Wout van Aert had led the way with 15:22 only for Lampaert to finish five seconds quicker to snatch top spot.

"This is something I would never dream of but I did it," said an emotional Lampaert.

"I have to be proud of myself."

Slovenia’s Tadej Pogačar, who has won the past two Tour de France titles, is also well positioned after the opening day.

He was followed by two Danish riders as Mads Pedersen of Trek-Segafredo and Jonas Vingegaard of Jumbo-Visma both finished in 15:32.

After glorious weather in the build-up to the event, the heavens opened, making life extra challenging for the 176 riders who competed in the individual time trial.

Despite the rain, thousands of spectators packed along the route to cheer and even hung outside windows to catch a glimpse of the action.

Copenhagen is the northernmost host of the Grand Départ and is staging the opening three stages before riders head to France.

Frenchman Jérémy Lecroq of B&B Hotels-KTM was the first competitor out of the traps in the Danish capital as he set off down Nørre Farimagsgade before finishing at Copenhagen city hall.

The adverse conditions proved too tricky for some, with Switzerland’s Stefan Bissegger of EF Education-EasyPost, France’s Christophe Laporte of Jumbo-Visma and Denmark’s Mikkel Frølich Honoré of Quick-Step Alpha Vinyl all slipping.

Van der Poel marked his Tour de France debut in 2021 by winning stage two and took an early lead in Copenhagen; there was excitement from the home crowd when Pedersen threatened to move in front, only to finish two seconds short of then former's time.

Van Aert, Pogačar and Ganna all started in the space of two minutes and looked like finishing in the top three only for Lampaert to claim first position.

Conditions improved as the evening’s action wore on, but no one was able to come close to Lampaert’s winning time.

Slovenia’s Primož Roglič of Jumbo-Visma placed eighth in 15:33, while The Netherlands’ Bauke Mollema of Trek–Segafredo came ninth in 15:34.

Dylan Teuns was Bahrain Victorious’ best performer, finishing 10th in 15:37 after a week that saw his team searched twice by police.

The raids are said to be linked to a preliminary investigation launched by French prosecutors at last year’s Tour de France into doping allegations against Bahrain Victorious.

Competition is due to continue tomorrow with a 202.5km ride from Roskilde to Nyborg incorporating the 18km Great Belt Bridge.