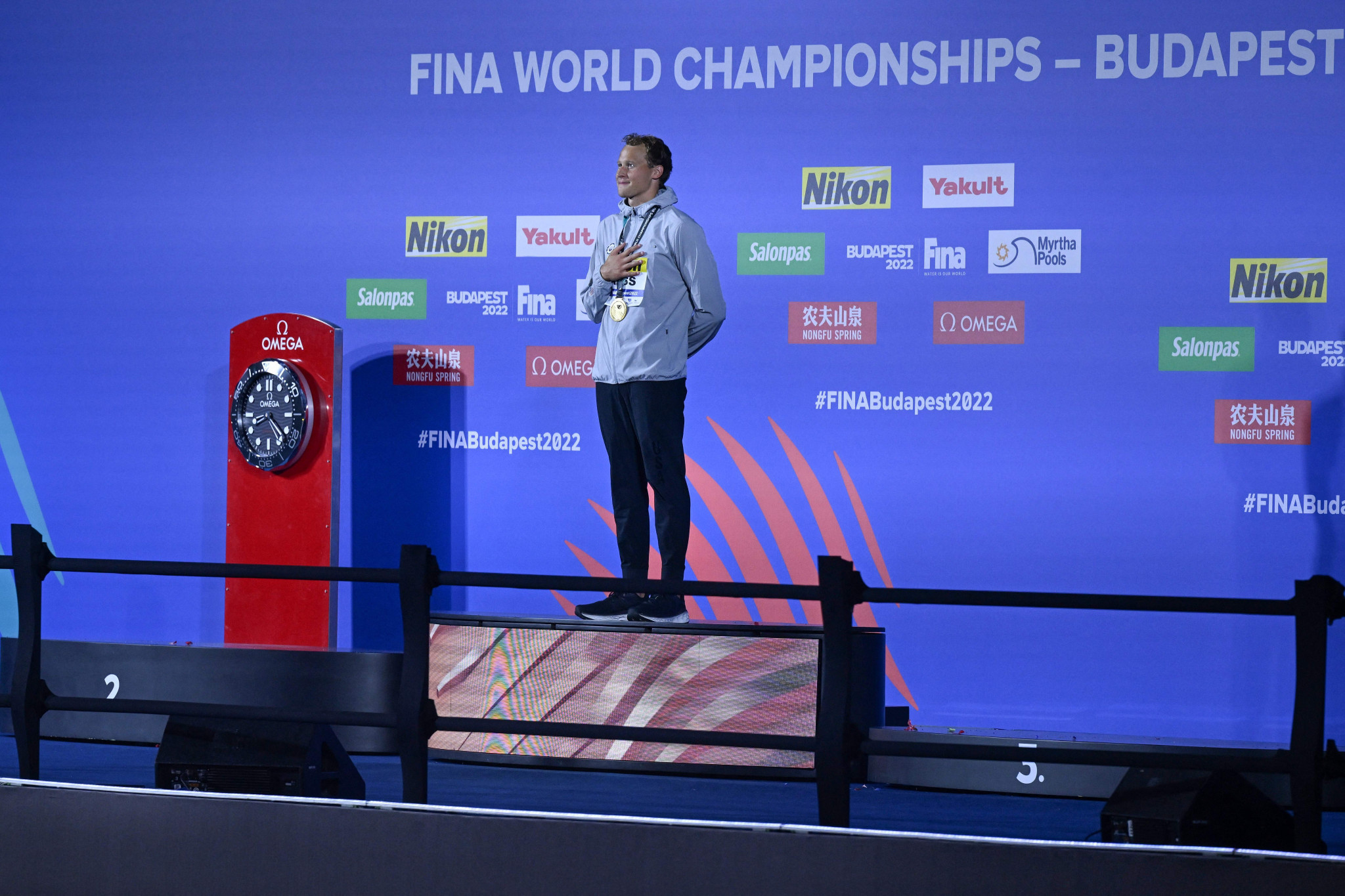 Swimming competition at the International Swimming Federation (FINA) World Championships concluded in bizarre fashion here, as American Justin Ress was initially disqualified from the men's 50 metres backstroke final before being reinstated as the gold medallist.

Ress led the timings in the heats and semi-finals, and triumphed by 0.02sec over compatriot Hunter Armstrong with his time of 24.12.

However, a lengthy review by the judges led to him being disqualified for being fully underwater at the finishing line.

Ress had been ready to conduct his winners interview the news was announced to a stunned Duna Arena in Budapest, Hungary.

Armstrong was left disappointed at the decision affecting his team-mate.

"I'm happy with this meet, I swam my best times here, this time also makes me happy," he said.

"But most importantly I'm very upset that my team-mate was disqualified and hopefully Team USA's protest will be successful."

Armstrong lined up on the podium initially for the victory ceremony alongside silver medallist Ksawery Masiuk of Poland, who clocked 24.49, and Italy's Thomas Ceccon, fresh from breaking the 100m backstroke world record on Monday (June 20).

Yet there was further drama, as Ress was reinstated as the race winner, and later had his own victory ceremony to formally receive the gold medal.

"I felt every single human emotion there is in a 30 minute span, so that's fun," Ress wrote on Twitter.

Ceccon dropped out of the top three with his time of 24.51.

The controversy with regards to the first race was followed by further remarkable storylines in the remaining six swimming finals.

We’re not crying, you're crying 🥹🥇@ArmstrongH_ passes on his gold to @LilJRess as the 50m back DQ is overturned!

Meilutytė won 100m breaststroke Olympic gold at the age of 15 at London 2012.

However, she served a 24-month suspension for anti-doping rule violations between July 2019 and 2021, missing Tokyo 2020.

Having already claimed 100m breaststroke bronze in Budapest, she ensured a triumphant return to the World Championships by winning the 50m final in 29.70.

A Championships record was then set in the men's 1,500m freestyle by Italy's Gregorio Paltrinieri.

For much of the race, he looked set to break the world record set at London 2012 by China's Sun Yang, and he was more than three seconds in the green with 150m remaining.

The world record slipped away, but his time of 14min 32.80sec was the second fastest of all time, and clinched victory by almost four seconds in front of reigning Olympic champion Bobby Finke of the US.

This was Paltrinieri's third victory in the 1,500m freestyle at the World Championships, adding to his gold at the Rio 2016 Olympics.

She notched 23.98, with second-placed Katarzyna Wasick of Poland 0.20 further back.

Sjöström is now within one individual medal of American swimmer Michael Phelps' all-time record of 20 at a FINA World Championships, with editions scheduled for 2023 in Fukuoka and 2024 in Doha.

Italy won their first gold medal in a relay at the World Championships by triumphing in the men's race as Alessandro Miressi edged a battle with the US' Ryan Held on the final leg.

Thomas Ceccon, Nicolò Martinenghi, Federico Burdisso and Miressi clocked a European record 3:27.51, beating the 3:27.79 from the US.

The US did claim their 17th swimming gold of the Championships by winning the women's 4x100m medley relay.

Regan Smith, Lilly King, Torri Huske and Claire Curzan recorded a time of 3:53.78, with Olympic gold medallists Australia having to settle for second in 3:54.24.

Artistic swimming drew to a close earlier in the day at the Széchy Outdoor Pool in Budapest.

Italy's Giorgio Minisini and Lucrezia Ruggiero followed their mixed duet technical routine success with another gold in the mixed duet free event, scoring 90.9667 in the final.

Russia dominated artistic swimming at the last World Championships in Gwangju in 2019, winning nine of the available 10 gold medals.

However, they and Belarus were banned by FINA from this year's edition in Budapest due to the war in Ukraine.

The gold that they failed to win in Gwangju was the women's team highlight routine, and Ukraine successfully defended their title in the Hungarian capital.

They added to their free routine combination gold with victory in 95.0333.

The second half of the World Championships is set to include diving and open water swimming competitions.