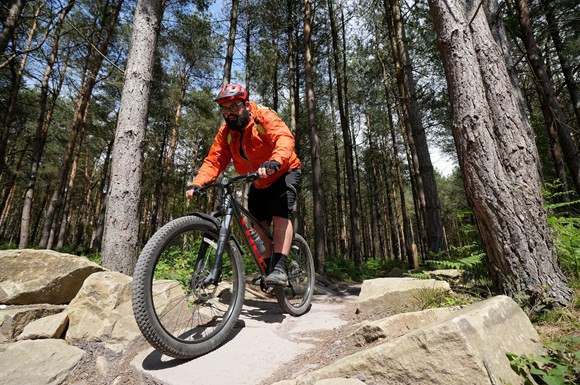 Cannock Chase Forest's new cycling trails and facilities have opened, two months before the start of the Birmingham 2022 Commonwealth Games.

At the official opening - undertaken by Forestry Commission chair Sir William Worsley - "Perry's Trail" was showcased, sharing its name with the Birmingham 2022 mascot, Perry the Bull.

That will be part of the course for the mountain bike competition for the Games.

"It was fantastic to show all our partners today the impressive and hugely beneficial development of the cycling facilities at Cannock Chase Forest," said Sir William.

"It is clear the new cycling centre really benefits the local community, by encouraging a healthy and active lifestyle whilst also connecting people with the fantastic forest environment."

Funding for this project came from Sport England, British Cycling and local councils.

The trail includes a play section for younger cyclists, who are being targeted for the next generation of mountain bikers.

Children from Burton Manor School were invited to the event and received coaching from British Cycling staff.

A coach from British Cycling will be based at Cannock Chase Forest until 2023 as part of the project to encourage and develop participation in cycling.

Mountain biking is scheduled to take place on August 3 during the Games.

The Birmingham 2022 Commonwealth Games is scheduled to run from July 28 until August 8.