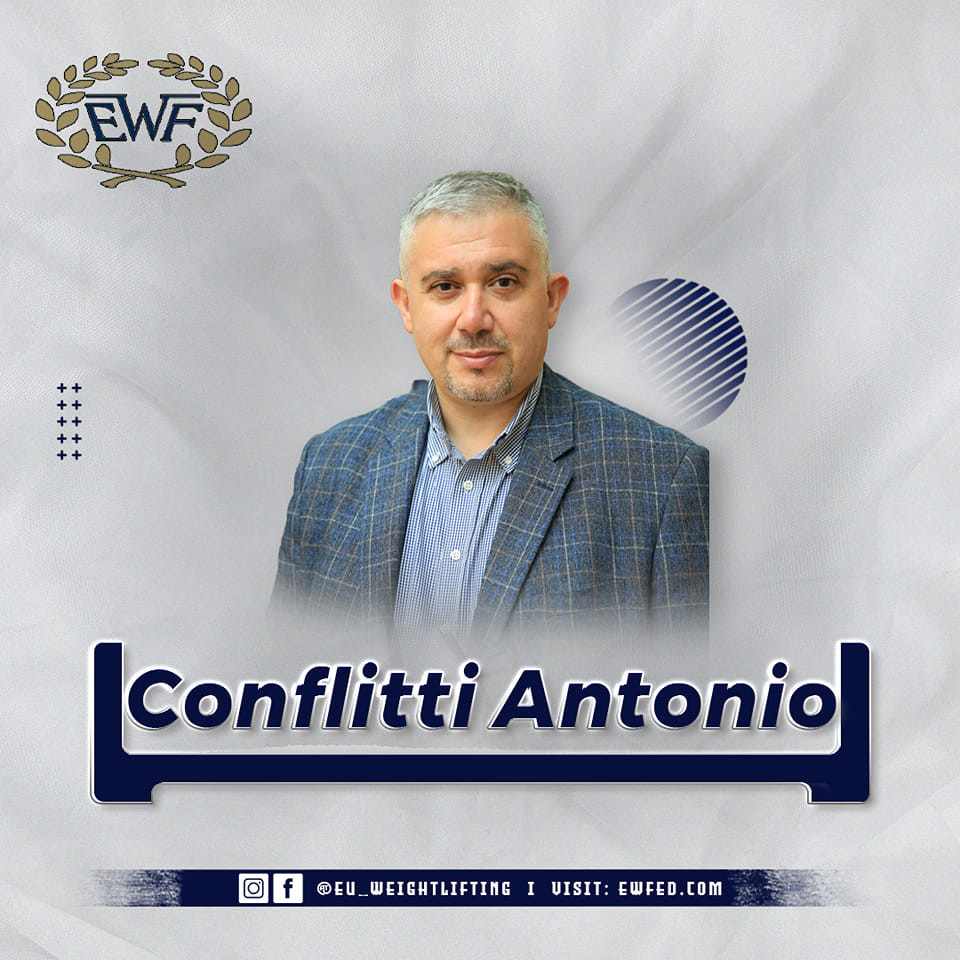 Antonio Conflitti is the new President of the European Weightlifting Federation (EWF).

Conflitti, who has overseen a change of culture in weightlifting in Moldova, aims to do the same in a continental federation which, he says, needs reform and a sense of unity.

"Europe has never been very united but today it is even more divided - other continents are more united than us," he said.

He sees the adoption of a new Constitution and a revamp of communications as top priorities.

In the second EWF election within eight months today, Conflitti polled 24 votes to defeat the British candidate Ashley Metcalfe, who had 15.

Four other candidates withdrew before voting, held online, began and another, David Kipshidze of Georgia, was eliminated in the first round.

Conflitti, an Italian, was given Moldovan citizenship in 2014.

He is a successful businessman who worked in Italian sport and the Government sector across four decades before moving to Moldova and becoming President of its national federation.

In the build-up to both elections he has stressed the importance of unity.

When today’s special Electoral Congress was called in November, he said it was the result of a period of "unprecedented crisis."

The EWF Executive Board had turned against its own leader, Interim President Maxim Agapitov from Russia, after he used the EWF website to make personal criticisms of rival delegates in the International Weightlifting Federation (IWF) elections, which were later postponed indefinitely.

That led to an overwhelming vote of no confidence in Agapitov at an EWF Congress in Finland in October.

Agapitov had stepped up in June when Hasan Akkus of Turkey, elected EWF President in April, stood down after being charged with a serious historic doping violation, which he is contesting.

Conflitti had raised concerns about Akkus in the April election, only to be defeated in the Presidential vote and lose his seat on the Board.

Now he is back as leader of the EWF, vowing to make improvements and end the infighting that has divided European weightlifting.

His influence in reforming Moldovan weightlifting is clear for all to see - athletes and coaches tainted by doping have been dropped, no doping violations for three and a half years, and impressive results from young lifters, most notably the IWF World Championships bronze medallist Marin Robu.

Conflitti, who holds a law degree, said: "I do not hide the fact that I represent a national federation that got involved in doping problems."

Conflitti took charge three years ago when Iuri Dudoglo, a serial doper, was banned for life, at which point weightlifting lost its financial support from the Moldovan state.

He got rid of the national team coach, one other coach and the entire senior team "except for one who had never been involved in doping."

"When athletes served their suspensions and asked to return to the team I said ‘No, out, goodbye.’

"We had to change.

"I’m relatively new in international matters, people don’t know me but what weightlifting needs now is new people, people who are willing to do something to change the situation.

"The International Olympic Committee is watching all the time, and will be keeping a close eye on the EWF as well as the IWF."

He said both organisations are in desperate need of improved communications and marketing.

"Our sport has lost a lot of popularity since the 1980s and has become more of a niche sport," said Conflitti.

"If we improve communications, we have a better chance to find sponsorship and commercial support.

"We should be streaming not just EWF activities but giving access to national federations to show streaming or videos of national championships.

"We should also have more training camps, not just two per year.

"We need to move with seminars, with learning, and to develop a programme for a permanent base for training under the flag of EWF, available for all."

His top priority for now, though, is adopting a new Constitution, in line with the one adopted in August by the IWF.