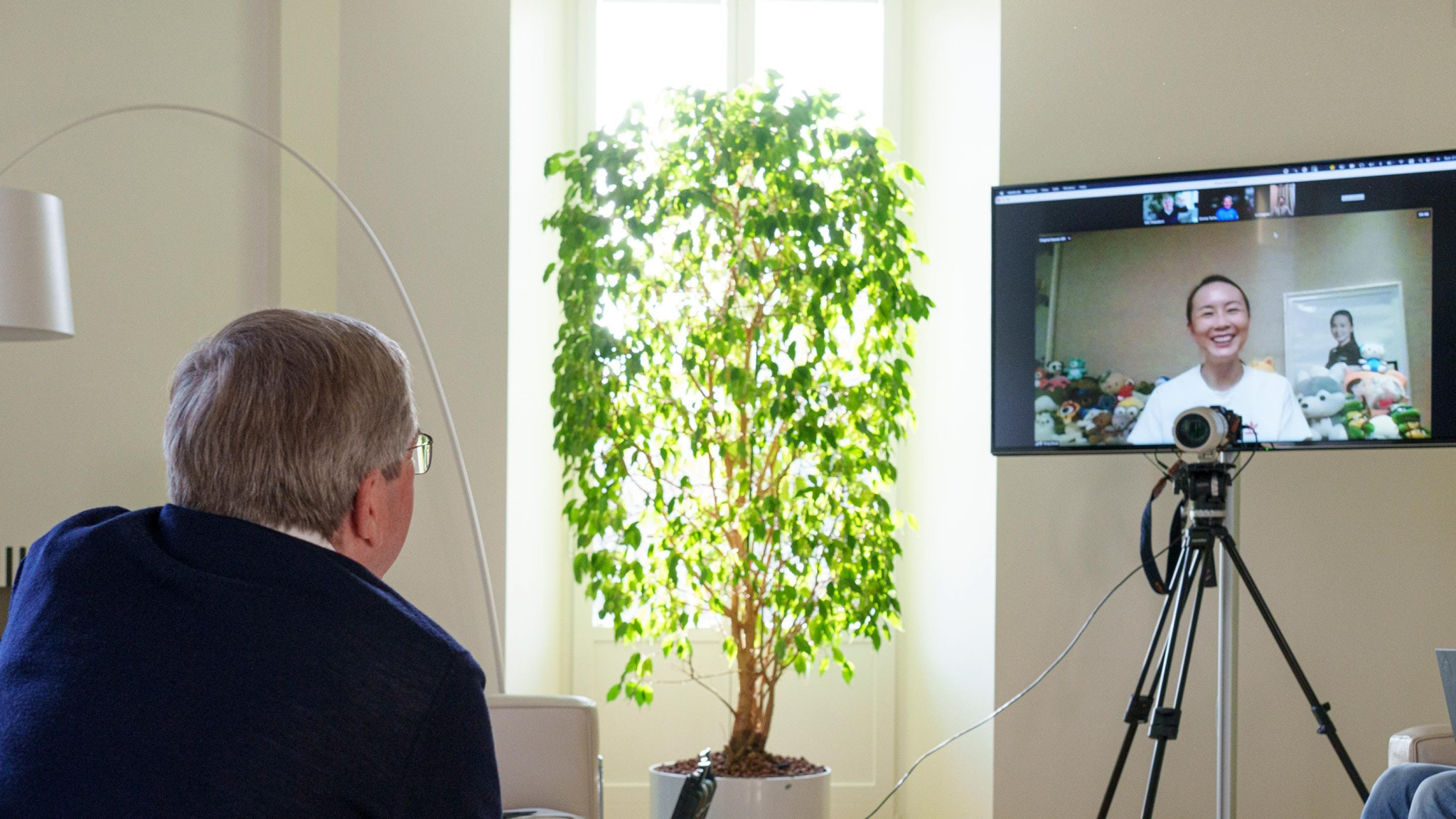 It was confirmed by the IOC yesterday that Bach held a 30-minute call with the Chinese tennis player.

Peng, a three-time Olympian, had not been seen or heard from publicly for several weeks after making allegations of sexual assault against China’s former vice-premier Zhang Gaoli.

The IOC said Peng told Bach she was "safe and well" at her home in Beijing but "would like her privacy respected at this time".

Bach’s call comes after Chinese state media released photos and video footage of Peng at a restaurant and a youth tennis tournament in Beijing.

However, the WTA said it remained concerned about the former Wimbledon doubles champion.

"It was good to see Peng Shuai in recent videos, but they don't alleviate or address the WTA's concern about her wellbeing and ability to communicate without censorship or coercion," said the WTA spokesperson.

When asked about Bach’s call with Peng, the spokesperson added: "This video does not change our call for a full, fair and transparent investigation, without censorship, into her allegation of sexual assault, which is the issue that gave rise to our initial concern."

Bach was joined on the call by IOC Athletes' Commission Emma Terho and Li Lingwei, former badminton player and a Chinese IOC member.

Terho said she was "relieved" to see Peng, adding she appeared to be "relaxed" and offered to stay in touch.

Bach invited Peng for dinner when he arrives in Beijing for the Winter Olympics, which she "gladly accepted", according to the IOC.

The IOC said Terho and Li also agreed to join them.

Peng claimed Zhang, a former senior vice-premier and high-ranking member of the Chinese Communist Party (CCP), sexually abused her 10 years ago and admitted to an on-off extra-marital affair since the coercive incident.

The allegations were made in a post on social media platform Weibo on November 2 but was taken down within 20 minutes.

The IOC has been criticised for failing to mention Peng’s sexual assault claims in yesterday’s statement.

"The IOC showed a complete disregard for allegation of sexual violence and abuse against athletes," a statement from Global Athlete read.

"By taking a nonchalant approach to Peng Shuai’s disappearance and by refusing to mention her serious allegations of sexual assault, IOC President Thomas Bach and the IOC Athletes' Commission demonstrate an abhorrent indifference to sexual violence and the wellbeing of female athletes.

"We are relieved that Peng Shuai is alive, but the IOC’s confirmation of a call with the tennis star does not ensure her safety or wellbeing."

Global Athlete described the IOC’s statement as a "harmful attempt" to appease both concerned athletes and Chinese authorities.

"The release pretends that Peng never made sexual assault allegations and has not been missing for more than two weeks," Global Athlete added.

"The statements make the IOC complicit in the Chinese authority’s malicious propaganda and lack of care for basic human rights and justice.

"Bach extended an invitation to Peng for dinner rather than ensuring her safety, and by doing so he made a mockery of a deadly serious situation that is regrettably all too familiar for many female athletes."

Global Athlete said the IOC should suspend the Chinese Olympic Committee until Peng is given "safe passage out of China" and a full and transparent investigation is conducted into her allegations of sexual assault.

Last week, WTA chief executive and chairman Steve Simon threatened to pull out of all 2022 events hosted in China, should independent and undeniable evidence of Peng's whereabouts and well-being not be provided.

Paris 2024 President Tony Estanguet, a former IOC Athletes' Commission vice-chair and ex-IOC member, has called for the "greatest transparency" regarding the health and safety of Peng.

The Lawn Tennis Association - Britain's tennis governing body - and the National Olympic Committees of The Netherlands, Britain and Germany have all shared concern over Peng's safety along with leading tennis players, including Serena Williams of the United States, Naomi Osaka of Japan and Novak Djokovic of Serbia.