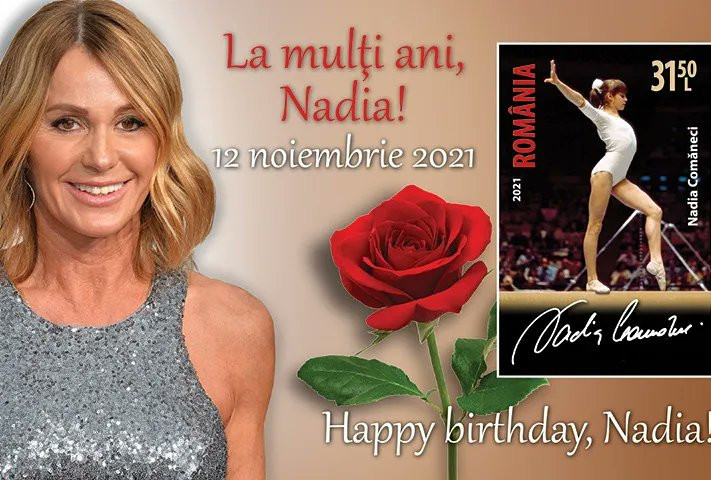 A special set of stamps have been released by Poșta Română to mark today’s 60th birthday of Nadia Comăneci, the first gymnast to be awarded a perfect score of 10.0 points.

The first stamp features a picture of Comăneci alongside a red rose.

The second stamp uses the same photograph of Comăneci alongside an image of her competing for Romania on the beam at the 1976 Olympic Games in Montreal.

The then 14-year-old had made history at those Games when, during the team compulsory portion of the competition, she was awarded the first perfect 10 for her routine on the uneven bars.

The Olympics official timekeeper Omega had been led to believe that competitors could not receive a perfect 10 and had not programmed the scoreboard to display this score.

Comăneci's perfect 10 thus appeared as "1.00," the only means by which the judges could indicate that she had received a 10.

During the remainder of Montreal 1976, Comăneci earned six additional "10s".

She won Olympic gold medals for the individual all-around, the balance beam and uneven bars.

Comăneci also won a bronze for the floor exercise and a silver as part of the team all-around.

At the 1980 Olympics in Moscow, Comăneci won gold medals on the beam and floor exercise.

Her international career ended a year later as, taller and heavier than she had been in Montreal, she earned two 10 scores at the Summer Universiade in Bucharest to huge home acclaim in what turned out to be her last championship appearance.

Comăneci defected from Romania in 1989 and now lives in the United States.

Following the death of Romanian dictator Nicolae Ceaușescu, Comăneci has returned to the country regularly, including for her wedding in 1996 to American gymnast Bart Conner.

To help commemorate Comăneci’s birthday, Romanian President Klaus Iohannis today signed a decree to decorate her with the "Star of Romania" order, the oldest and highest distinction offered by the country.

This is the fourth time that Comăneci has appeared on stamps published by Poșta Română.

The first was shortly after her performance at Montreal 1976, making it one of the first times that a living person had appeared on a stamp issued in Romania.

Poșta Română then featured Comăneci on stamps in 2001 and 2016 to mark the 25th and 40th anniversaries of her performance at the Olympics in the Canadian city.

Comăneci has also appeared on stamps in several other countries, including Azerbaijan, France, Mongolia, North Korea and The Netherlands.