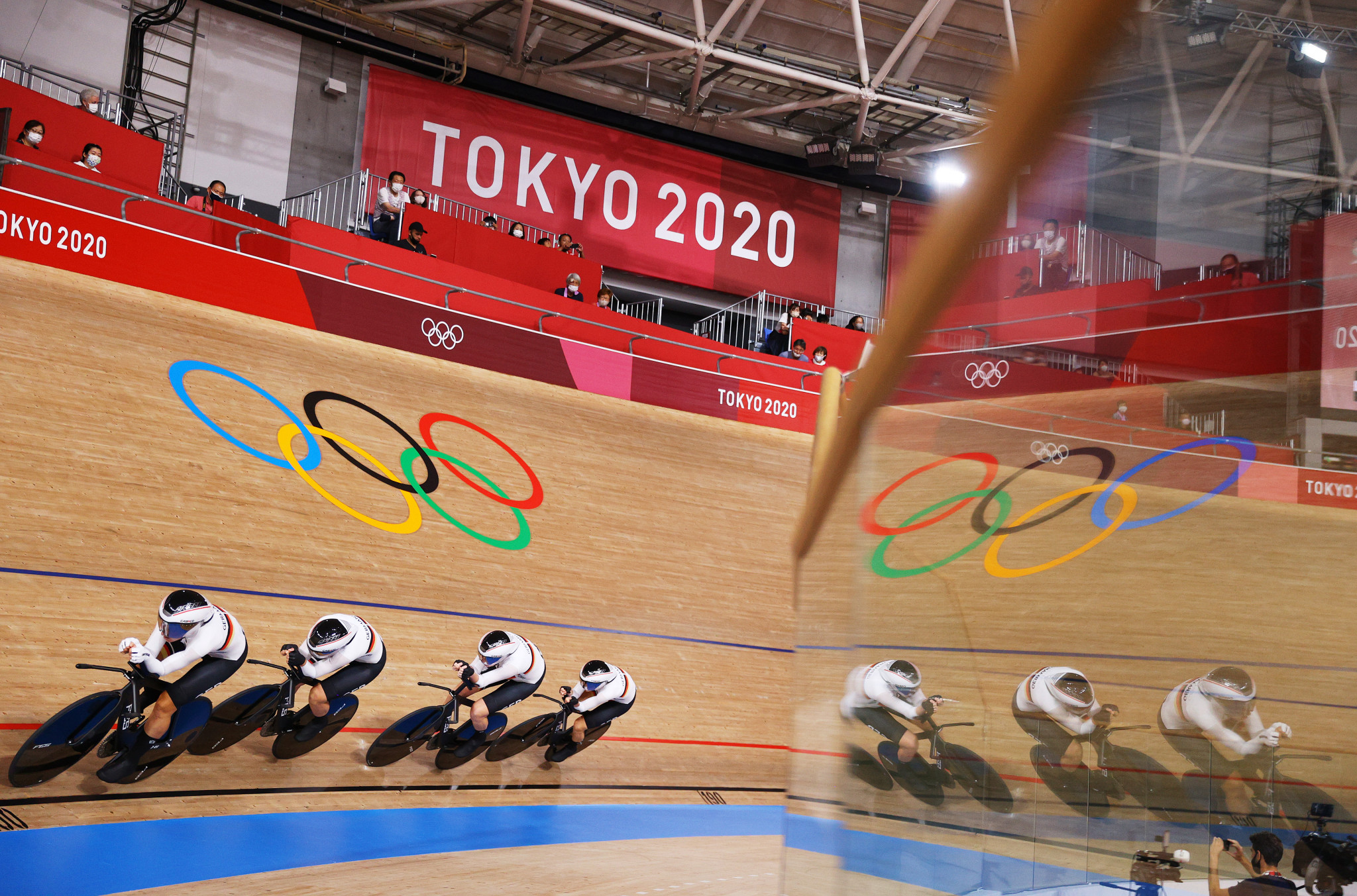 The German team of Franziska Brausse, Lisa Brennauer, Lisa Klein and Mieke Kroeger had shown themselves to be the squad to beat yesterday, after topping qualification in 4min 7.307sec.

Defending champions Britain responded in the first round of competition today, clocking a world record 4:06.748 to overcome the United States and secure a place in the gold medal ride.

Their time only lasted a matter of minutes with Germany lowering the mark further to qualify in 4:06.166.

Germany’s ability to back-up their rides had been questioned in the past, but Brausse, Brennauer, Klein and Kroeger proved they had further fuel in the tank at Tokyo 2020.

The quartet proved too strong for Britain in the final as they led from the start of the 4,000 metres event and narrowed the gap on their rivals in the closing stages.

A further reduction of the world record to 4:04.242 was an additional flourish, as Germany became the first team other than Britain to win the women’s team pursuit at the Olympic Games.

"To win the gold medal with a world record, it's just unbelievable,” said Kroeger.

“This is the dream of every athlete, and I'm so proud of these girls and everyone who supported us and believed in us.

"We made it today, and we just let it all out.

“We really fought to the line, this makes me really, really proud."

The bronze medal race saw the US ease to victory over Canada, after Megan Jastrab, Jennifer Valente, Chloe Dygert and Emma White posted a time of 4:08.040.

The trio entered the final as the favourites after beating Poland in the first round in an Olympic record time of 41.431 seconds, with Britain’s Ryan Owens, Jack Carlin and Jason Kenny advancing from their race in 41.829.

The final proved a one-sided affair as Hoogland, Lavreysen and van den Berg went faster again by stopping the clock in 41.369.

A disjointed British ride saw Kenny finish the effort in 44.589.

The silver medal saw Kenny join Sir Bradley Wiggins as Britain’s most decorated Olympian on eight medals, with the sprinter still level with former team mate Sir Chris Hoy for the most gold medals on six.

France’s Florian Grengbo, Rayan Helal and Sébastien Vigier secured bronze, with the trio clocking 42.331 to beat Australia, who finished in 44.013.

The British team announced the withdrawal and subsequent retirement of three-time Olympic champion Ed Clancy due to a back injury.

A dispute between the British and Danish teams over tape applied to the legs of the latter’s riders yesterday had overshadowed the build up to their first-round meeting.

Denmark avoided disqualification but removed the tape for the first round ride, with the world record holders cruising towards a successful catch to move towards the final.

The leading Danish rider crashed into Charlie Tanfield, the late replacement for Clancy, leading to an uncertain few hours where the qualifiers for the medal rides remained in doubt.

The International Cycling Union eventually ruled that Denmark would join top qualifiers Italy in the final, with Australia and New Zealand competing in the bronze medal ride.