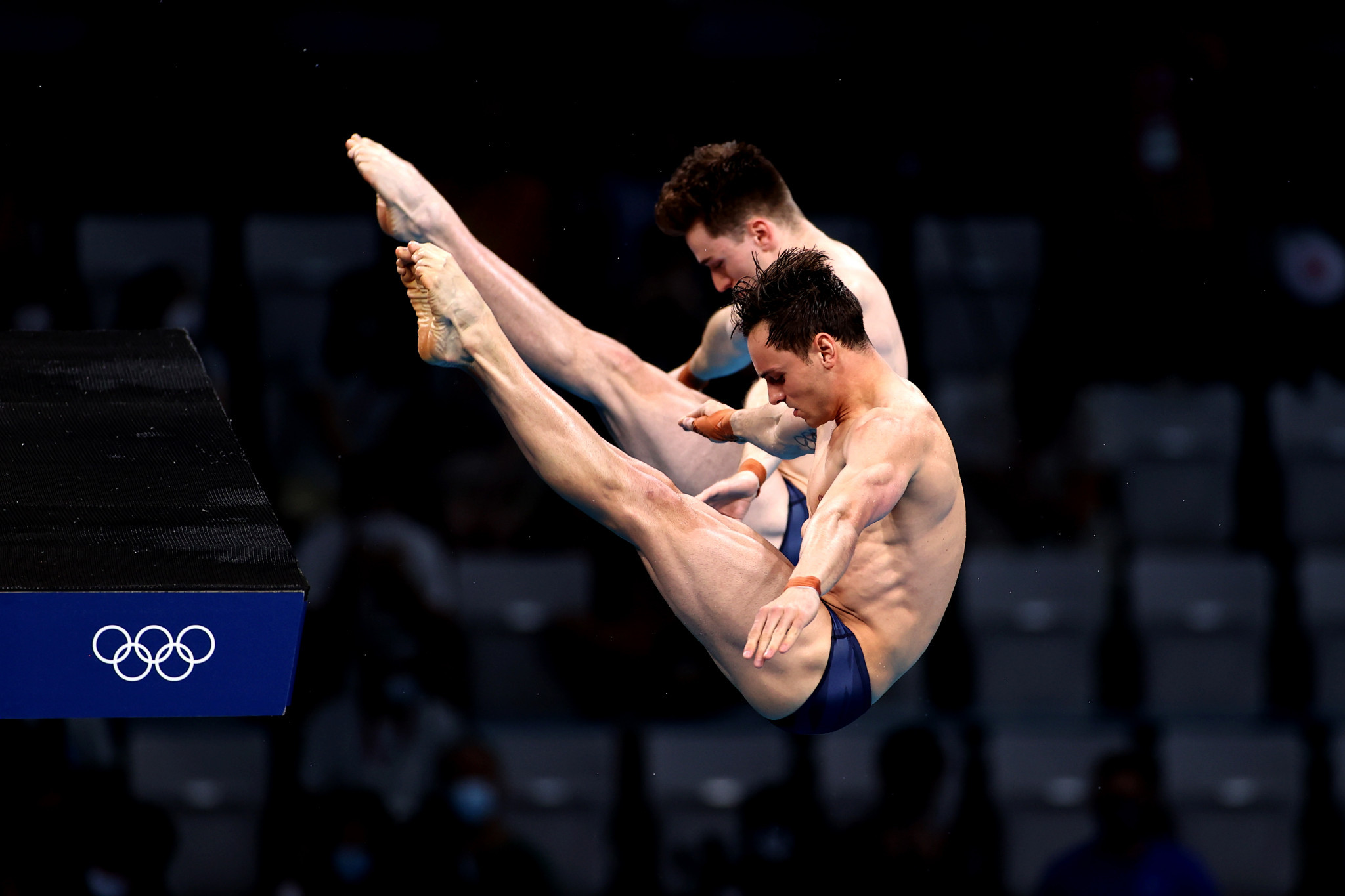 Tom Daley and Matty Lee of Britain took advantage of a rare Chinese diving error to claim a superb gold in the men's synchronised 10 metre platform final at Tokyo 2020.

China's Yuan Cao and Aisen Chen were the favourites to continue Chinese domination of the sport here but faltered with their fourth dive.

Yuan and Aisen, who have both won this title before with different partners, attempted a back 3½ somersaults piked but the synchronisation was off and they entered the pool with a huge splash.

It was only the sixth best dive of the round and, despite topping the charts for the other five, Daley and Lee's superb consistent diving was enough to give them the title.

Their back 3½ somersaults piked in round four, when China erred, scored an excellent 93.96 to send them into gold medal position.

They then ended with a huge 101.01 for their forward 4½ somersaults tucked - the hardest dive they attempted in the competition.

Daley and Lee faced an anxious wait when China saved their best for last - registering 101.52 for a back 2½ somersaults 2½ twists piked.

For Daley, it meant a first Olympic title at 27 in a career that already included every other major prize and two bronze medals at this level.

Tokyo 2020 was his fourth Games and he was just 14 when debuting on the grandest stage at Beijing 2008.

"Oh my goodness, it's kind of unbelievable," said Daley, who revealed he had knee surgery last month that nearly ruled him out of the Games.

"I've dreamt, as has Matty, since I started diving 20 years ago, of this moment of becoming an Olympic champion.

"And to take it to my fourth Olympic Games, when I think a lot of people probably would have not considered it to be my peak Olympic Games.

"I thought I was going to win an Olympic gold medal in Rio, and that turned out to be the complete opposite by a long shot.

"And it was my husband who said to me that my story wasn't finished, and my son or child - we didn't know at the time - needed to be there to watch me win an Olympic gold medal.

"And the fact that I can say that my son watched me become Olympic champion - albeit on TV and they couldn't be here - is just, it's such a great feeling.

"Many times I've doubted that this moment would ever come.

"In 2018, I had broken shins, and I didn't know if I was going to be able to do my running platform take-offs again.

"And I started doing synchro with Matty in October 2018, and the build-in through this whole period has just been really ropey.

"Starting off last year, I broke my hand, and then wasn't sure if I was going to get back in time for the Olympics last year, and they got delayed with lockdown."

Lee described the nervous wait to see if they had won gold.

"We knew we were definitely guaranteed a silver.

"And basically, there's a little Omega time clock on the side of the pool that either will come up with one or two after the Chinese dive.

"And it comes up before the big board.

"So we now look at that, and we were just waiting and hoping like, fingers crossed, hoping we'd see a two.

"However, for the detailed performance, we are a little bit disappointed that we had some mistakes, especially in the fourth round," Yuan said.

"We had some mistakes, which led us to have some low points.

"So this is disappointing, but we have to face it."