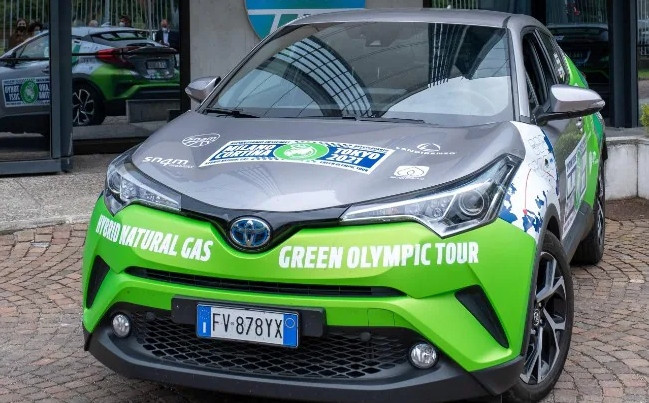 International Olympic Committee (IOC) TOP sponsor Toyota is currently driving one of its new environmentally friendly cars from Milan and Cortina d’Ampezzo to Tokyo and back again to showcase its technology.

The 12,000-mile round trip will link the host of the next Summer Olympic Games with the sites of the 2026 Winter Games.

The Snam4Mobility hybrid natural gas and biomethane Toyota C-HR, a hybrid vehicle that, powered by biomethane or natural gas, set off on its journey last Thursday (June 10) and is due to arrive in the Japanese capital before the Olympic Opening Ceremony on July 23.

During its trip through Italy, the car will be fuelled entirely by biomethane, with driver Guido Guerrini and journalist Roberto Chiodi at the wheel.

Guerrini has previously driven from Turin to Beijing and a Lisbon to Vladivostok in ecological cars.

In 2016 and 2017 he won the FIA Alternative Energies Cup in the co-drivers' category.

Chiodi has taken part in three Beijing to Paris events and a world tour for historic cars,

"This vehicle offers a trivalent solution capable of combining the advantages of electricity with those guaranteed by natural gas and biomethane," said Alessio Torelli, Snam’s chief mobility officer.

"Already today, more than 25 per cent of the gas used for transport in Italy is of organic origin and we believe that this solution has great potential for decarbonising mobility of people and goods, from light to heavy vehicles."

This will not be the first occasion that a Winter Olympic Games in Cortina d’Ampezzo will have been exploited by a car manufacturer.

The legendary British car, the Ford Cortina, was named after Cortina d'Ampezzo following its hosting of the 1956 Winter Olympic Games.

As a publicity stunt to help launch the car in 1964, several Cortinas were driven down the town's bobsleigh track, the Eugenio Monti olympic track, by a group of drivers including Jim Clark, winner of the Formula One World Championships the previous year.