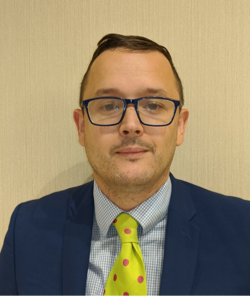 My experience of coronavirus lockdown perked up considerably when the computer game Football Manager 2020 suddenly became available for free.

I'm never one to miss a bargain and the chance to sit in a virtual dugout seemed like a good way to spend the increased amount of spare time that had come my way.

My wife disagreed with this assessment and described my fascination with the pixelated footballers running across the screen as "sad".

I tried to claim that I was an "esports athlete" preparing for an elite competition but this didn't seem to get me anywhere, and I remain obliged to sneak in my playing time around other "more worthwhile" pursuits.

Deciding what team to manage is always a tricky question as there are literally hundreds of options from leagues across the world.

In the end I plumped for FC Triesenberg, a small side plying its trade in the seventh tier of Swiss football.

My choice was made after I fell down a YouTube rabbit hole one afternoon and stumbled across a video devoted to the game called "The Liechtenstein Challenge".

Triesenberg, you see, is not located in Switzerland but in the tiny neighbouring principality of Liechtenstein, which is nestled in between the Swiss and Austrian borders.

As well as a bargain I also like a challenge and the YouTuber had set himself an intimidating one by opting for another Liechtenstein club in FC Balzers.

Liechtenstein does not have its own football league so all of its clubs - also including FC Vaduz, Eschen/Mauren, Schaan, Triesen and Ruggell - play in the Swiss system.

A common Football Manager challenge involves picking a side from an obscure nation and trying to make them the best in the world, but with Liechtenstein there is an added element of difficulty thanks to a rather unfair rule.

No clubs from the country are allowed to qualify for European competitions through the Swiss league system, with the Liechtenstein Cup the only route to UEFA events.

In real life, FC Vaduz currently play in the Swiss top flight, the Super League, but even if they were to win it they would not be given the chance to mingle with the continent's elite in the UEFA Champions League.

They would instead have to settle for a spot in the UEFA Europa Conference League, the new third tier European tournament which winning the Liechtenstein Cup provides passage to.

The Champions League is not out of reach for Liechtenstein clubs but it is essentially impossible to get there.

A club would first have to win the Conference League, which would earn a place in the second-tier UEFA Europa League for the following season.

They would then need to win the Europa League at the first time of asking to earn the Champions League place that this offers.

There is zero margin for error in this barmy route, never mind the fact that the Liechtenstein clubs fall well short of the standard required to pull it off. If Vaduz somehow got to the Europa League final and lost, for example, they would have to start all over again in the Conference League the next season, providing they had won the Liechtenstein Cup to earn their place.

The ultimate goal of the Liechtenstein Challenge on Football Manager is not just to reach the Champions League but to win it.

Can I achieve this with Triesenberg? Probably not - even at the best of times the players good enough to do this won't want to play in the Swiss leagues - but I am going to have a crack all the same.

When I start a save I invariably become interested in what is happening at the club and in the country in real life. I am not one of those nutters who puts a suit on when playing a cup final or anything like that, but I do like to learn and see what interesting nuggets of information I can glean.

I'll take a look at where the opposition clubs are located and what happened to various players in their actual careers. Google becomes a close ally and it is very easy to fall down a labyrinth of rabbit holes.

On one such dissent I learnt that the Olympic history of Liechtenstein is very much a family affair.

I was surprised to learn that this microstate of just 62 square miles and around 39,000 people has won an impressive 10 Olympic medals, all at the Winter Games and all in Alpine skiing.

Four of these have been brought home by Hanni Wenzel, including golds in the women's slalom and giant slalom at Lake Placid 1980.

She also won downhill silver at the same Games, as well as a slalom bronze at Innsbruck 1976 which was Liechtenstein's first-ever Olympic medal.

Hanni's brother Andreas won giant slalom silver in Lake Placid and then bronze in the same discipline at Sarajevo 1984, but the Wenzels are not the only Liechtensteiner siblings to have shone on the grandest sporting stage.

Step forward Willi and Paul Frommelt, who both won medals of the same colour in exactly the same event. Willi took home slalom bronze in Innsbruck before Paul followed suit at Calgary 1988, 12 years on.

Ursula Konzett also won a bronze medal in the women's slalom at Sarajevo 1984 but, disappointingly, appears to have no family links to the others.

The same cannot be said about Tina Weirather, who won women's super-G bronze at Pyeongchang 2018.

She is the daughter of Hanni Wenzel and Harti Weirather, an Austrian skier who competed in 1980 in Lake Placid.

There are other family members we can throw into the mix. Petra Wenzel, the sister of Hanni and Andreas, was an Olympian in Lake Placid and Sarajevo.

Her daughter Jessica Walter also became an Olympian and raced at Turin 2006.

Christof Frommelt, the father of Willi and Paul, appeared at the 1948 Winter Games in St. Moritz in cross-country skiing. A family affair indeed.

When learning all of this, I found myself nodding along approvingly. It is perhaps my favourite family tree related fact after the revelation that one of Mick Jagger’s sons was a great uncle as soon as he was born (don’t try to work this out, it’ll make your head hurt).

Another marvellous anecdote concerning Liechtenstein at the Olympics involves the country's flag.

The story goes that the nation's team pitched up at the Berlin 1936 Games and discovered their flag was exactly the same as Haiti's.

Officials dutifully reported back that this would not do at all and Liechtenstein responded the very next year, adding a crown at the top of the horizontal strips of blue and red.

In football, Vaduz are the dominant force. They have won the Liechtenstein Cup 47 times, which is apparently a world record for a national competition.

Their past European adventures include a tie with French giants Paris Saint-Germain in the now defunct Cup Winners' Cup in 1996, which they lost 7-0 on aggregate.

Out of the last 22 Liechtenstein Cups, Vaduz have missed out on the trophy only once - in 2012 when Eschen/Mauren caused a massive upset by beating them in the final on penalties.

When last season's edition of the trophy was cancelled due to coronavirus, Vaduz were simply handed the European spot as their stature is so much greater than any of their local rivals.

The national team, unsurprisingly, have done little of note, although that may change thanks to the creation of the UEFA Nations League which pits teams of similar standard against each other more often.

Liechtenstein did earn a credible 2-1 victory over 2022 World Cup hosts Qatar in Doha three years ago, while their largest win is a 4-0 success over Luxembourg from 2004.

At the other end of the scale they have the indignity of being the only side to have ever lost a match to San Marino, the most diminutive of Europe’s footballing minnows.

I learnt plenty more about the country outside of sport.

The language, for instance, is German and Triesenberg's nickname is "Die Bärger". They play at the wonderfully sounding Sportanlage Leitawies which I am getting to know particularly well.

Liechtenstein is also one of only two double landlocked countries in the world - the other being Uzbekistan but you don't need me to tell you that.

It is the world's largest producer of false teeth. Hans-Adam II, the Prince of Liechtenstein, is the richest monarch in Europe with wealth which dwarfs that of Queen Elizabeth II. In 2003, a referendum asking citizens to increase the powers of the Prince, including giving him the right to dismiss the Government, passed handsomely.

Another vote in 2012, which hoped to remove the Prince's veto powers, was overwhelmingly rejected (although presumably he could have used his veto had it gone the other way).

Hans-Adam's sister is of course Princess Nora of Liechtenstein, who has been an International Olympic Committee member since 1984.

A strange incident occurred in 2007 when Switzerland accidentally "invaded" the country. Around 170 soldiers strayed across the border but nobody seemed to mind and life in the mountainous tax haven carried on as usual.

I could go on with more facts, but it is now one of those rare moments when a more worthwhile pursuit does not need to be pursued.

So, if you'll excuse me, Triesenberg is calling.