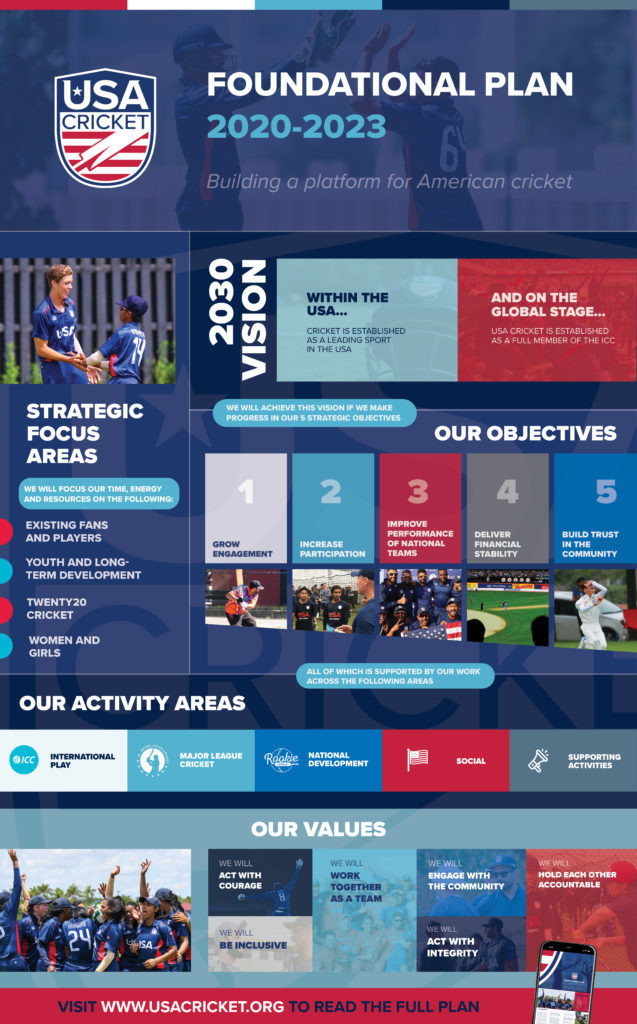 Cricketers in the United States have launched a "Foundational Plan" which they hope will make the country a leading nation in the sport by the end of the decade.

"The launch of this Foundational Plan is the culmination of a lengthy but important piece of work, which now sets the roadmap for the development of the sport in the United States over the next few years," said USA Cricket chairman Paraag Marathe.

The plan will boost efforts to include cricket as a sport in the 2028 Olympics in Los Angeles and for the US to host major international competitions.

USA Cricket chief executive Ian Higgins said: "By 2030 we believe that cricket can become a mainstream sport in the USA and we can establish USA Cricket as a full member of the International Cricket Council (ICC)."

If successful the Americans could join the 12 existing test playing nations although participation in the Twenty20 format will be heavily promoted in the early stages.

Higgins said: "T20 is best suited to growing the sport in a new market like the USA.

A "Major League" is to be launched by 2022 with "global appeal and reach." This is likely to be similar in format to the highly successful Indian Premier League.

A grass roots minor league will also be established next year.

"We will work closely with the ICC and lend our full support to efforts to include cricket on the sports programme of the 2028 LA Olympic Games and future editions of the Pan-American Games."

Although the US took part in the inaugural ICC Trophy for associate members in 1979, they have never reached the final stages of the 50 over or T20 World Cup.

The make up of their recent sides has been predominantly Asian American.

"To get the greatest amount of engagement and support as quickly as possible, we will focus our activities predominantly in the population bases across the USA where there is already significant interest in and passion for the sport," said Higgins.

Wider programmes will encourage youngsters to try the game including with “soft” ball, rather than the traditional hard cricket ball.

Officials have "prioritised" plans to increase participation by girls and women in their initial objectives.

It may come as a surprise to discover that cricket was once the leading summer sport in the US. The first recognised international match was between the United States and Canada in 1844 and an English team first toured North America in 1859.

In 1874 a team predominantly of baseball players including Hall of Famer Albert Spalding, played matches at Lord’s Cricket Ground in London and a team styled "The Philadelphians" made regular visits before the First World War.

Baseball has long since eclipsed cricket as the summer game. An American team did play at Lord’s in 1968, but the most recent American to enjoy success on the most famous cricket ground in the world were the archers who won team silver at the 2012 Olympics.