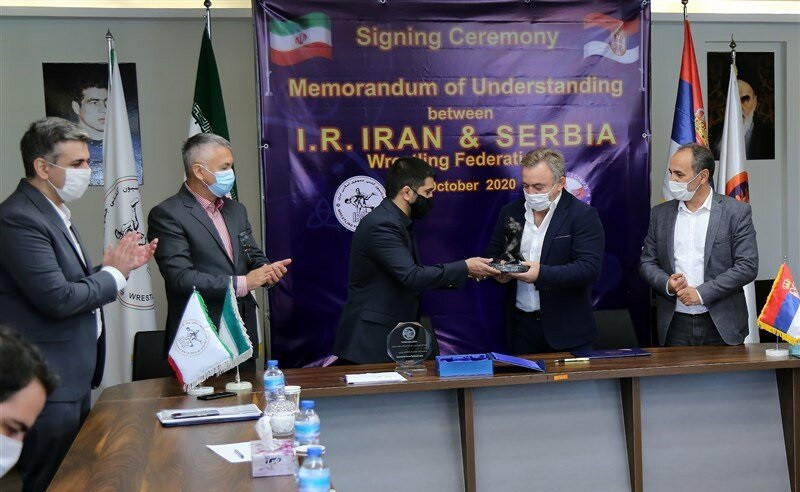 A Memorandum of Understanding (MoU) has been signed between the Iranian and Serbian Wrestling Federations just weeks after the execution of Navid Afkari.

The agreement came a month after Iran received widespread condemnation for the execution of 27-year-old wrestler Afkari.

The Iranian was given two death sentences for allegedly stabbing a security guard and his involvement in demonstrations against the country's regime in 2018.

He claimed he had been coerced into giving a false confession before he was executed in September.

United World Wrestling (UWW) and the International Olympic Committee (IOC) were among multiple organisations to call for clemency, and Afkari's killing led to calls from many for Iran to be excluded from the Olympics.

UWW, headed by Serbian Nenad Lalović, downplayed the prospect of Iran being banned from wrestling competitions or the Olympic Games, however.

Despite the international criticism following Afkari's execution, the Serbian Wrestling Federation seemingly has no qualms about being associated with its Iranian counterparts.

"It's a great opportunity for our federation to learn from Iran since we are at the beginning of the way," Trajković said, as reported by Tehran Times.

"We both have the same favorite subject and it's wrestling.

"Iran can be a role model and we can use the country's experience to organise the world competitions.

"I am impressed by the lovely atmosphere at the Khaneye Koshti."

The MoU has been criticised, however, with World Players Association executive director Brendan Schwab claiming it is "devastating to those who are fighting for justice in the name of Navid."

"World Players maintains that global sport must make five commitments in response to the horrific execution of wrestling athlete, Navid Afkari," he said.

"These include investigating and protecting athletes from discrimination based on their political opinion, including currently in Iran and Belarus and historically in Bahrain.

"We strongly believe that the targeting of athlete activists constitutes political interference in sport and warrants the strongest response from international sports bodies including the IOC and UWW.

"We have not seen the text of the MoU between the Serbian and Iranian wrestling federations and will seek a copy from UWW as a matter of urgency.

"However, the signing and championing of such a relationship at this point in time is devastating to those who are fighting for justice in the name of Navid.

"It shows the absence of a proper human rights strategy within the Olympic Movement and world wrestling.

"At a minimum, UWW should require its national bodies to undertake an open, transparent and comprehensive human rights due diligence before entering into such an agreement."

"The UWW should have first suspended the Iranian Wrestling Federation then followed that up with offering assistance to the Iranian wrestlers," he said.

"The fact that they are moving forward with a 'business as usual' approach is shocking.

"Nothing is usual about what happened to Iranian wrestler Navid Afkari or what is happening with other Iranian athletes.

"Athletes look to sport leaders to provide a duty of care which clearly is not the case here.

"This is one of many reasons that human rights need to embedded into the Olympic Charter."

insidethegames has contacted UWW for comment, with Serbia's capital Belgrade tentatively scheduled to host this year's World Championships in December.

Iran has also recently been awarded the Boys' Under-19 World Championship by the International Volleyball Federation, with competition set to be held next year.

This is despite the continued obstacles preventing Iranian women from attending volleyball matches in the country.

A blanket ban was issued in 2012, before the rules became more moderate in June 2017, with Iranian authorities allowing only a limited number of pre-vetted women to attend matches.