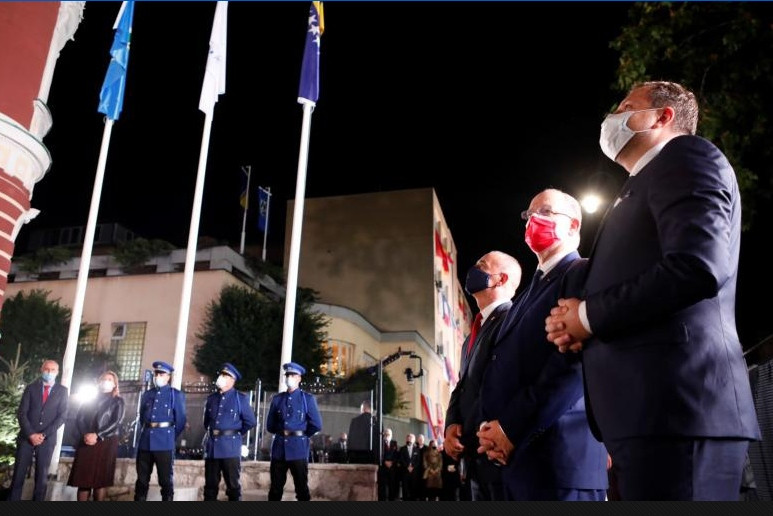 Monaco's Prince Albert has helped reopen the Olympic Museum in Sarajevo nearly three decades after it was destroyed during the Bosnian War.

The building, originally built as a luxury villa in the early 20th century, commemorated Sarajevo hosting the 1984 Winter Olympic Games but was among the first major landmarks to be destroyed in 1992 by Serb forces during the siege of the Bosnia and Herzegovina (BiH) capital which left nearly 14,000 people dead.

Sarajevo’s Mayor Abdulah Skaka has pledged to restore the city's architecture to its former glory, which is still recovering from the siege which lasted for nearly 1,425 days until 1995, and the Olympic Museum is among the first to open its doors again.

"At the beginning of our mandate, we clearly said that we would restore all the destroyed and demolished symbols of this city, and slowly, our dream is coming true," Skaka told guests, including Olympic Committee of Bosnia and Herzegovina President Izet Rado.

"Tonight, is proof of that.

"This Museum, our city, Bosnia and Herzegovina was defended by the best sons of our country, some tonight are not with us, they gave their lives on that path and may mercy and eternal glory and praise be upon them."

"The new and better Olympic Museum plays a big role in preserving the memory of all unforgettable sports games and it will continue in the future," Bach said.

"The Museum shows the history of the living sport of BiH in all its aspects and the whole spectrum of human emotions.

"It is a place to learn, think and enjoy.

"They will learn about the power of sport in creating a better future."

Prince Albert was shown around the Museum, which contains memorabilia such as photographs, souvenirs and some athletes' equipment.

There are also works from artists devoted to Sarajevo 1984, including those of Andy Warhol, Michelangelo Pistoletto, Henry Moore and James Rosenquist.

There is additionally an area dedicated to the 2019 European Youth Olympic Winter Festival, which Sarajevo hosted.

Bosnian artist Edin Numankadic, founder of the Museum, preserved a large part of its collection during the conflict by hiding items in the basement of the Zetra Olympic Rink.

The arena was made famous during Sarajevo 1984 by British figure skaters Christopher Dean and Jayne Torvill, who won the Olympic gold medal in ice dance with a historic set of perfect sixes.

Numankadic had said in an interview last year that the Museum perpetuated "a rare happy memory" in Sarajevo’s history.