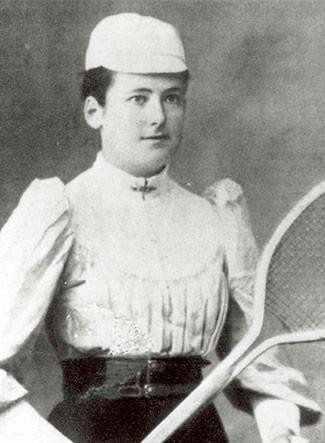 A blue plaque has been unveiled in Newbury in the United Kingdom to five-time Wimbledon champion and Olympic silver medallist Lottie Dod.

Dod lived in the area from 1905 to 1913 and the plaque has been placed in Victoria Park in the town in Berkshire.

Dod – whose full Christian name was Charlotte – was best known as a tennis player.

She won the Wimbledon Ladies' Singles Championship five times, the first one in 1887 when she was only 15.

In addition to tennis, Dod competed in many other sports, including golf, field hockey and archery.

Dod also won the British Ladies Amateur Golf Championship in 1904, played twice for the England women's national field hockey team, which she helped to found, and won a silver medal at the London 1908 Olympics in archery.

The Guinness Book of Records has named her as the most versatile female athlete of all time, together with track and field athlete and fellow golf player Babe Zaharias.

At the start of World War One, Dod qualified as a nurse and served at a military hospital near Newbury, being awarded a Red Cross gold medal in 1921.

She later sang contralto for the London Oriana Madrigal Society and was a renowned pianist and bridge player.

Dod died in 1960, aged 88, passing away while listening to the Wimbledon radio broadcasts in bed.

Dod was elected to the International Tennis Hall of Fame in 1983.

"We are very grateful to local resident Mr Allan Mercado for bringing to our Heritage Working Group's attention this outstanding individual and her connection with Newbury," Newbury Town Council leader Martin Colston said.