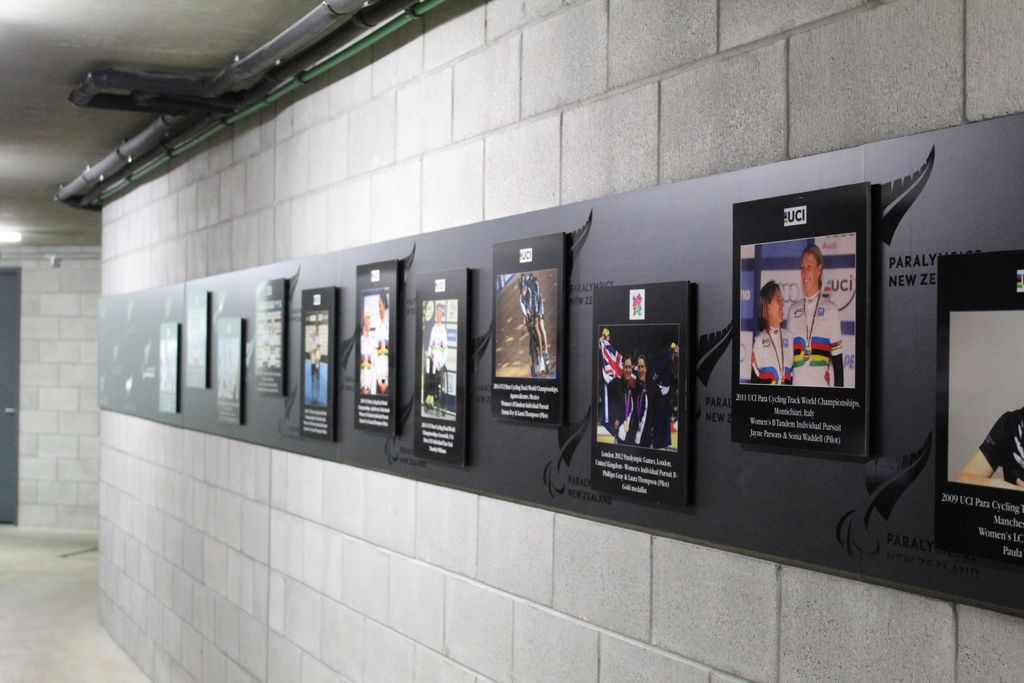 A Para Cycling Walk of Champions has been unveiled at the Avantidrome in Cambridge to celebrate the achievement of New Zealand’s Para-cycling world champions and Paralympic gold medallists.

Nine Para-cyclists feature on the walk, with their achievements spanning 12 years and including 12 World Championship titles and two Paralympic gold medals.

The Walk of Champions walk extends from the inside of the Avantidrome via a tunnel to the infield, sitting across from a similar wall that celebrates Olympic medallists and world champions.

"The nine Para cyclists celebrated here today for their achievements at a Paralympic Games or World Championships are incredible athletes and individuals who have been the best in the world in their chosen sport," said Fiona Allan, PNZ chief executive.

"It is critical that we celebrate their achievements and share these with all New Zealanders.

"Para athletes and Paralympians are sporting heroes and they inspire future Paralympians to be the best they can be and build on their success.

"Further to this, through the power of sport they positively influence community perceptions of disabled people and promote a more diverse and inclusive society."

The Para Cycling Walk of Champions begins in chronological order of achievement with a plaque dedicated to the first ever Paralympic gold medal won in Para cycling by Paula Tesoriero at Beijing 2008.

Tesoriero won a gold and two bronze medals at the Beijing 2008 Paralympic Games, as well as winning two World Championships titles in 2009.

Tesoriero is currently the New Zealand Disability Rights Commissioner and was last year appointed to serve as the country’s Chef de Mission at the Tokyo 2020 Paralympic Games.

Jayne Parsons and her sighted pilot Sonia Waddell are recognised after winning the women’s B tandem individual pursuit world title in 2011.

The achievement is followed by Phillipa Gray and Laura Thompson's gold medal ride at the London 2012 Paralympic Games, with the duo setting a world record time in the process.

Foy’s three world titles with sighted pilot Hannah van Kampen are marked, with the duo securing two gold medals on the track and one on the road during 2019 and 2020.

The wall currently concludes with recognition of Eltje Malzbender’s two world titles in 2019, which were earned in the women’s T1 time trial and road race at the Para Cycling Road World Championships.

"To have the plaques of the Para cyclists who have medalled in the past along the Walk of Champions right next to their able bodied counterparts is the most validating thing to see," said Para-cyclist Nicole Murray.

"It embodies the positive direction that people behind the scenes are working to take Para sport towards.

"I’m very proud to be a part of this significant moment in New Zealand’s Para cycling history."

Cycling New Zealand chief executive Jacques Landry said it was fitting that both able bodied and Paralympic cyclists achievements were marked in the tunnel.

"With the addition of recognising our Para cycling champions, the Walk of Fame takes on more completeness," Landry said.

"This wall is a celebration of excellence and reflects determination, dedication and sheer will power to overcome all obstacles and be the best.

"It is very fitting that both able-boded and Para cycling champions now feature through this tunnel.

"We look forward to the continued performances of all New Zealand cyclists and with predicted gold medal performances over the next four to eight years we hope their achievements outgrow the current tunnel."