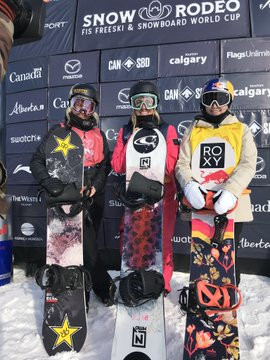 The Pyeongchang 2018 Olympic silver medallist and 2017 world champion clinched victory with a first-run score of 78.31 points and then went onto improve her mark to 79.56 on the Winsport Slopestyle course at Canada Olympic Park.

"First run, everything went well," Blouin was reported as saying by the Canadian Broadcasting Corporation.

"I couldn't have done that run better, so I had to upgrade that last jump and I did.

"Yeah, I'm stoked that I just landed both runs.

"It's just perfect and when it's sunny, it's so much fun to ride."

Tiarn Collins had his stomping boots on today at the Calgary Snow Rodeo slopestyle, putting ‘er down on this run for score of 80.50 and the first World Cup win of his career...? @snowsports_nz @WinSportCanada #snowrodeo #fissnowboard #slopestyle #snowboarding #stomped pic.twitter.com/8aS9aHpRGu

She is 400 points behind Great Britain's Katie Ormerod, who finished third today thanks to her best run of 68.71 points.

Norway's Silje Norendal was today's runner-up after managing 75.68 points on her first run.

In the men's event, New Zealand's Tiarn Collins triumphed with a second-run score of 80.50 points.

Tobita leads the World Cup standings for men with 1,616.40 points.

Collins is his nearest challenger with 1,340 points and is followed by the United States' Dusty Henricksen, who did not start the event in Calgary, with 1,290 points.

The last snowboard slopestyle competitions of the season are due to take place in Czech town Špindlerův Mlýn on March 20 and 21.

Qualification is scheduled to be held on day one before the finals take centre stage on day two.