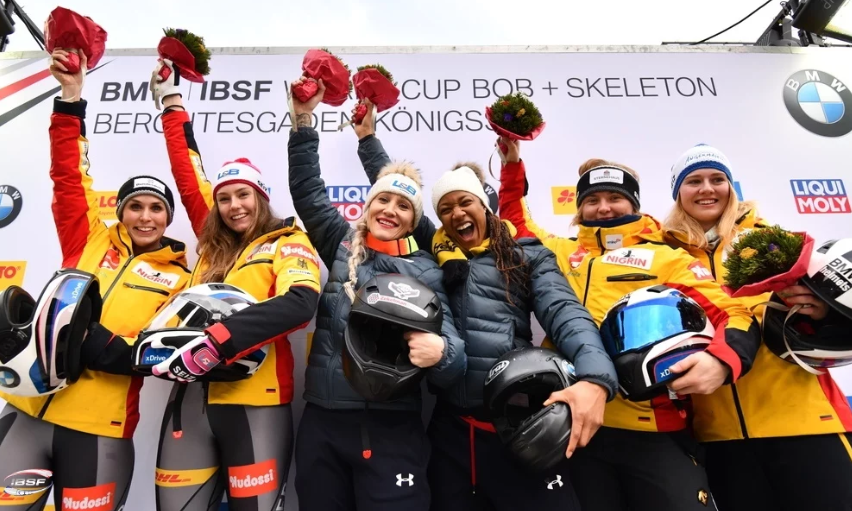 Kaillie Humphries, now competing for the United States, secured her 25th World Cup victory in the two-woman bob at the International Bobsleigh and Skeleton Federation (IBSF) World Cup in Königssee in Germany.

The 2010 and 2014 Olympic champion, competing in the colours of her native Canada took the title alongside brake athlete Sylvia Hoffmann at the Artificial Sliding Track.

But it certainly was not easy, with Humphries finishing in a time of 1min 41.57sec, just 0.03 seconds quicker than Germany's Erline Nolte at the end of two heats - her fourth World Cup podium finish in a row.

Bronze went to World Championship silver medallist Stephanie Schneider, also of Germany, in a time of 1:41.66.

With her third win of the season, Humphries has extended her lead at the top of the overall standings.

She's on 1259 points, with Stephanie Schneider in second on 1,211, and the world champion and defending World Cup title holder Mariama Jamanka of Germany in third on 1,171.

In the men's two-man bob, Francesco Friedrich of Germany delivered yet another victory, alongside Thorsten Margis.

The Olympic and world champion celebrated his fourth successive victory at the fifth of this season's eight races, in a time of 1:38.66.

The bronze medal went to Nico Walther of Germany, with Malte Schwenzfeier in 1:39.19.

It was Walther's first two-man bob podium of the season, having missed the first two races of the winter through injury.

At the top of the overall standings, Friedrich has a huge lead sitting on 1,110 points.

Kripps is second on 992 points, with Switzerland's Michael Vogt in third on 864.

The four-man bob is due to conclude the competition tomorrow.