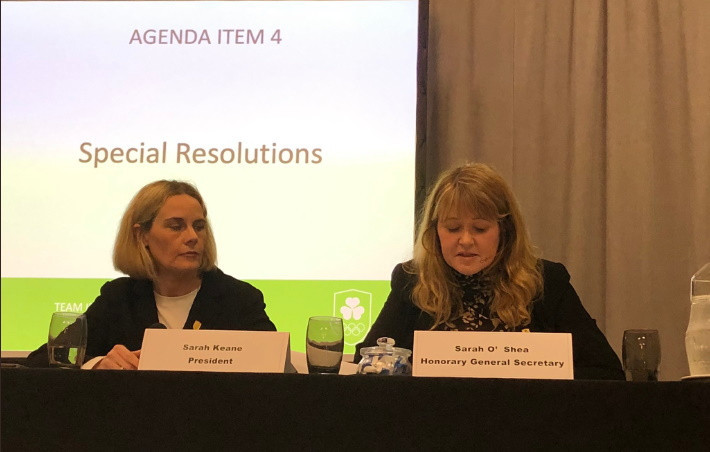 Members of the Olympic Federation of Ireland (OFI) have voted in favour of two amendments to the constitution at an Extraordinary General Meeting (EGM) in Dublin.

The EGM, held at Ballsbridge Hotel, was called to seek approval from the members to change the company name from the Olympic Council of Ireland (OCI) to the Olympic Federation of Ireland, and to reduce the number of officers on the Board.

Ireland's National Olympic Committee was rebranded from the OCI to the OFI in September 2018 which involved a new logo and new trading name.

The vote at the EGM represented the final step in the process, which was to complete the legal name change process in its entirety.

The second item voted on was the reduction of the officers on the OFI Board from five to three, and the number of ordinary Board members from seven to six, during the coming five years.

The OFI Governance Committee and Board recommended the changes to ensure that room is allowed for adding two new independent members onto the Board, a change that was already approved last year.

Separately, members were advised that boxing and hockey tickets for next year's Olympic Games in Tokyo will go on public sale in Ireland from next Monday (December 9) at 10am.

This follows a process of engagement between the authorised ticket reseller (ATR), Elämys Group, and the athletes' families through their respective National Governing Bodies.

President of the OFI Sarah Keane thanks the delegates for attending the #OFIEGM19 and highlights a number of items to expect in the new year:

Irish people who are planning to travel to Japan's capital for Tokyo 2020 can purchase tickets here.

Similar to the initial public sale, and other worldwide sales of Olympic tickets, demand is expected to be very high with tickets expected to sell out quickly.

As reported by The Irish Times, restricted supply and unprecedented demand means the OFI has already indicated it will be unable to guarantee all athlete and family ticket requirements for Tokyo 2020.

Elämys Group was confirmed as the OFI's ATR in April 2019.

It replaced the controversial agreement between the OCI and British firm THG.

The THG agreement was ended after nine years in 2017, following the ticketing scandal which emerged at the Rio 2016 Olympics.

The agreement was negotiated by former OCI President Patrick Hickey, who resigned from his role following his arrest as part of a Brazilian inquiry into the handling of tickets at Rio 2016, but was not approved by the OCI Executive Board.

It was due to expire after the conclusion of the 2026 Winter Olympics in Milan and Cortina d'Ampezzo.