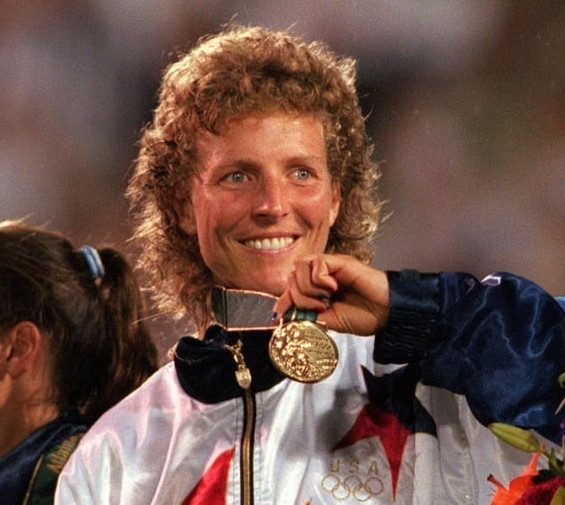 It was part of a collection which included 60 lots of memorabilia put up at Goldin Auction by the American.

It included all of her major tournament gold medals, including those from the 1991 and 1999 FIFA Women's World Cup.

It also included the shirt and shorts she wore in the United States' 2-1 victory over China in the gold medal match at Sanford Stadium in Athens, Georgia, before a crowd of 76,489 as the US were crowned the first women's Olympic football champions.

The boots Akers wore in the US victory over China eight years later at the Rose Bowl in Pasadena - a match memorably decided on penalties when Brandi Chastain scored the deciding spot-kick - sold for $3,690 (£2,850/€3,350).

FIFA Player of the Century Award. This is one of the biggest awards of my career and when I look at this award and think about being Player of the Century and what it means, it represents not necessarily one player, but an amazing journey. The journey of my career and the game and everything along the way. It represents who I played with (the best players in the world on the best team in the world) and the ones who coached me (Anson Dorrance, Tony DiCicco), and the opportunities available (Title IX, a USWNT in 1985, an endorsement by UMBRO 1991, a World Cup 1991, a paid player contract 1995, an Olympics 1996, etc), and it holds the memories of the opportunities I did not have and the many challenges endured on and off the field (injury, no pay or very little pay, no pro league, inequality, disrespect, crappy fields, poor equipment, etc). To me the Player of the Century is about all these things... and since I was there from Day One (with the USWNT), it allows me to view and experience this through the dream born in me as a little girl in Seattle, Washington (of one day being the best player in the world playing on the best team in the world). So with that as the context, it seems fitting to me to be passing this award on (and with it the dream), so it can continue to inspire as it has inspired me💪⚽️ Go register to bid for this and the rest of my personal memorabilia collection at www.GoldinAuctions.com. Please share! All proceeds go toward my horses/animal welfare work, farm relocation, family time, and fulfilling the next steps of my life dream❤️😍🙏🐴💪😊🙌 thank you

A portion of the proceeds was given to the Michelle Akers Horse Rescue and Outreach Foundation.

Akers played 153 matches for the US from the team's inception in 1985, scoring its first goal, through to 2000 when she retired because of injury two weeks before she was due to make her second Olympic appearance at Sydney.

She hung up her boots as the second-leading goal scorer with 107 behind Mia Hamm.

Akers was named FIFA Player of the Century along with Chinese Sun Wen in 2002.