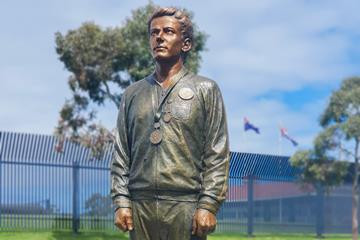 Former Olympian and Labour Senator Nova Peris has claimed the establishment of a statue to Peter Norman, who played a part in the hugely controversial men’s 200m podium protest for civil rights at the Mexico 1968 Olympics, was "long overdue".

Peris, among those who campaigned for formal home recognition of Norman’s actions, made her comment after the unveiling of the statue in Melbourne on October 9, the 13th anniversary of the Olympic silver medallist’s death.

Peris, who became the first Aboriginal Australian to win an Olympic gold as a member of the women’s hockey team at Atlanta 1996, told sbs.com.au: "One thing that comes to my mind is long overdue...there's been two or three statues of Peter Norman in America and we finally got ours.

"I would've liked to have seen Peter along with Tommie and Johnnie as well, but maybe that's something we can look to in the future."

Peris added that her fight for Norman's recognition was inspired by his championing of Indigenous rights in Australia upon his return from the Mexico City Olympics.

"He was outspoken about the white Australia policy and the removal of Aboriginal children, so he had a lot of empathy, a lot of understanding of human equality," she said.

"I guess what Peter saw was how sports could bring people together and how a black man or a black woman when they ran it was almost freedom because they were sort of treated as equals."

Norman was criticised and ostracised by sporting authorities in Australia after joining the protest staged by the US sprinters who had finished in gold and bronze positions, respectively Tommie Smith and John Carlos, in support of civil rights in the United States.

On Friday (November 1), Smith and Carlos were inducted into the United States Olympic and Paralympic Committee’s Hall of Fame.

Among those who attended the unveiling ceremony were his coach Neville Sillitoe, now 94, his mother Thelma and daughter Janita.