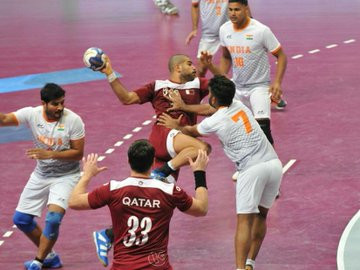 Hosts Qatar and Saudi Arabia both made it two wins out of two in Group A to advance through to the semi-finals of the Asian Men's Handball Olympic Qualification Tournament for Tokyo 2020.

Saudi Arabia beat Hong Kong 41-16 before Qatar, the runners-up at the 2015 World Championships, defeated India 40-10 at the Duhail Handball Sports Hall in Doha.

The two teams are due to play each other on Monday (October 21) to decide the winner of Group A.

Action in Doha is scheduled to continue tomorrow with Kuwait facing South Korea and Iran meeting Bahrain in Group B.

The top two teams from Group B will also progress to the semi-finals, taking place on Thursday (October 24).

The medal matches are scheduled for Saturday (October 26).

Overall victory in the eight-team tournament will ensure qualification for Tokyo 2020.

The runners-up have another chance to book a berth at the International Handball Federation qualification tournaments in April.