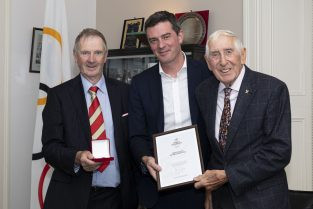 Olympic gold medallist Ronnie Delany has become the first Irish athlete to be presented with an OLY pin after his work championing the initiative.

The OLY project is run by the World Olympians Association, who have given Olympians the chance to place the letters after their name.

Delany, the 84-year-old President of the Irish Olympians Association (IOA), has spearheaded the idea in Ireland and many athletes from the country have come forward.

He was presented with his pin by Olympic Federation of Ireland (OFI) chief executive Peter Sherrard at the OFI headquarters in Howth.

Three-time Olympic fencer and treasurer of the IOA John Bouchier-Hayes was also in attendance.

"It's an honour to present Ronnie Delany with the first OLY pin in Ireland, and to thank both him and John Bouchier-Hayes for the work that they do with the Irish Olympians and their lifelong commitment to Irish Olympic sport," said Sherrard.

"As an athlete, Ronnie's phenomenal gold medal win in 1956 continues to inspire generations of athletes.

"The work and energy he puts into Olympism and connecting Olympians is admirable."

Allowing Olympians to use OLY is said to recognise the years of hard work it takes to reach that level.