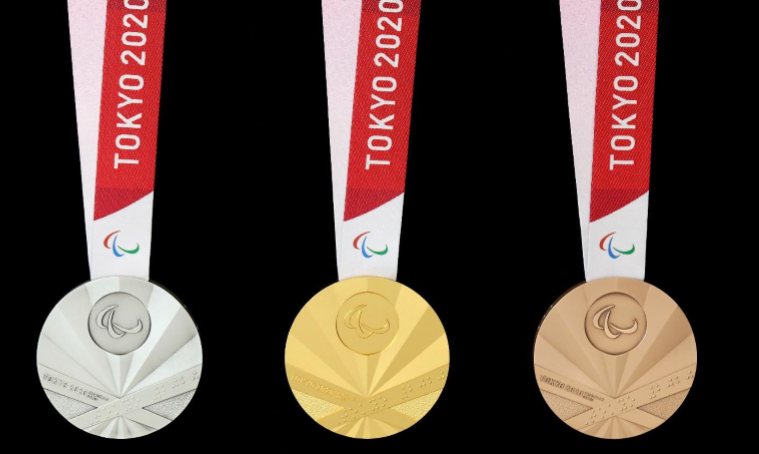 The medals for the Tokyo 2020 Paralympics have been revealed as celebrations were held today marking one-year-to-go.

Organisers unveiled a design based around a traditional Japanese fan and also showed off the medal ribbons and cases.

Festivities at the NHK Hall further included the display of the Paralympic Torchbearer uniform as the countdown to the Opening Ceremony on August 25 next year enters another phase.

Each medal features the words "Tokyo 2020" in braille while there are a series of circular indentations on the sides - one for gold, two for silver and three for bronze.

"The design is centered around the motif of a traditional Japanese fan, depicting the Paralympic Games as the source of a fresh new wind refreshing the world as well as a shared experience connecting diverse hearts and minds," Tokyo 2020 said.

"The kaname, or pivot point, holds all parts of the fan together; here it represents Para-athletes bringing people together regardless of nationality or ethnicity.

Check us out at NHK Hall, where we will be celebrating the countdown to next year's Paralympic Games and will finally be unveiling the medal design for the Tokyo 2020 Paralympic Games. https://t.co/EDSuMgpXeO

"Motifs on the leaves of the fan depict the vitality of people's hearts and symbolise Japan's captivating and life-giving natural environment in the form of rocks, flowers, wood, leaves, and water.

"These are applied with a variety of techniques, producing a textured surface that makes the medals compelling to touch."

All Tokyo 2020 medals at the Olympic and Paralympics are being made with recycled metal after the public were urged to donate old mobile phones and other devices.

The Paralympic ribbons are in the Games colours of crimson and cherry blossom while the wooden cases have been individually hand-crafted from Japanese ash.

"I am very grateful that I could take part in these historic Games as a designer," said medal designer Sakiko Matsumoto.

"I wanted to keep the athletes front and centre as I conceived this design.

"I hope these medals bring athletes and the people around them closer together and stirs a fresh new breeze in their hearts."

The Torchbearer uniform is a yellow and white design which features the Tokyo 2020 chequered motif.

Flames will be lit in all 47 Japanese prefectures, as well as the birthplace of the Paralympics at Stoke Mandeville in Britain, and combined together before the Opening Ceremony in Tokyo.

"The idea behind this design is that the flames congregating from all over Japan are expressed with the traditional ichimatsu chequered pattern, which has traditionally been regarded as a symbol of good fortune in Japan," said uniform designer Daisuke Obana.

"Its aim is to help express the thoughts and enthusiasm of the groups of three Torchbearers.

"I hope that excitement for the Paralympic Games will build up nationwide and around the world with the thoughts and enthusiasm of the runners wearing these uniforms."