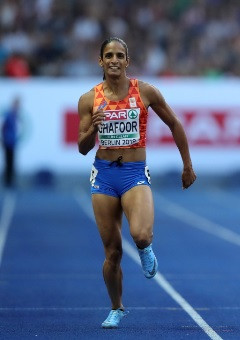 Dutch Olympian Madiea Ghafoor has been arrested in Germany after police allegedly found 50 kilograms of methamphetamine and ecstasy worth around €2 million (£1.8 million/€2.2 million) in the boot of her car.

According to reports, the drugs were found in Ghafoor's vehicle during a a routine check near the German border.

The 26-year-old, part of the Dutch 4x400 metres squad at the 2016 Olympic Games in Rio de Janeiro, is reportedly still in Germany and is set to face charges of drug smuggling.

Dutch daily newspaper Algemeen Dagblad reported the athlete told officers she was heading for a training session in Düsseldorf before her car was checked by police.

The arrest took place last month but details have only been released by the German public prosecution department this week.

Ghafoor has not been seen since she competed at the Diamond League event in Rabat on June 15 but has reportedly told her family she is unavailable to compete or train due to "personal reasons".

In a statement, the Royal Dutch Athletics Federation said it had "taken notice of the situation with horror" and has "offered help to the family" of the athlete.

Ghafoor was in line for selection on the Dutch team for the International Association of Athletics Federations World Championships in Doha in September and October before her arrest.

It is not yet clear whether she has retained this status following her arrest.