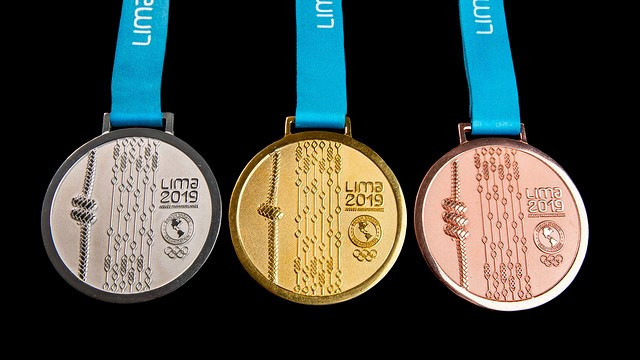 The medals which will be awarded at the Lima 2019 Pan American and Parapan American Games are "synonymous with Peruvian pride", according to Organising Committee President Carlos Neuhaus.

Made partly with pure Peruvian copper, the 4,981 gold, silver and bronze medals feature designs based on the country's history and culture.

This includes The 12-Angled Stone, a national heritage object which was once part of an Inca palace, and the Kuélap Fortress, a settlement in southern Peru which lies at 3,000 feet and is surrounded by "cloud forests".

The Candelabra of the Andes, a prehistoric geoglyph dating back to 200 BC, has also been etched into the medals.

Each medal weighs 320 grams and is 80 millimeters in diameter, with a 6mm thickness.

They have copper bases while the gold medals have been plated with 24 carats.

Every medal was mined from within Peru, with organisers claiming this ensures "that the winning athletes will receive the proud work of thousands of Peruvians who participated directly or indirectly in the mining process".

"The best athletes of the Americas will receive a symbol that highlights the efforts of so many of our countrymen and will be a highlight to our wonderful history."

Seventeen days of competition and ceremonies will be held at the Pan American Games from July 26, with 39 sports on the programme.

It will be the biggest sporting event in Peru's history.

The Parapan American Games will take place between August 23 and September 1 and feature 14 sports.