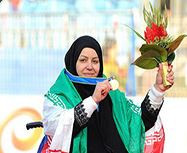 Iran's Paralympic Games medallist Razieh Shirmohammadi has died after a heart attack at the age of 42.

The archer claimed a Paralympic Games bronze medal alongside Zahra Javanmard and Zahra Nemati in the women's team recurve open contest at London 2012.

Born in Mashhad, Shirmohammadi was one of Iran's most decorated archers.

Among her medal collection are a World Championship gold from Beijing in 2017 and a bronze medal from Turin in 2011.

At the 2019 World Para Archery Championships in 's-Hertogenbosch in The Netherlands, Shirmohammadi had earned her place at Tokyo 2020.

She also won a gold medal at the Asian Para Games in Guangzhou in 2010 and silver in Indonesia last year in the compound open mixed team event.