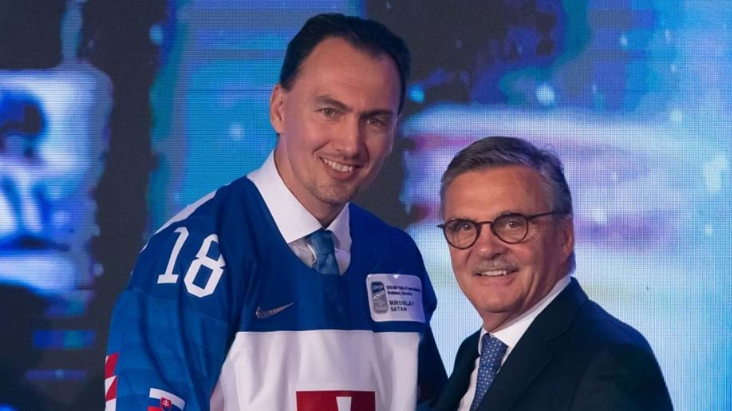 Four-times World Championship medallist Miroslav Šatan has been elected President of the Slovak Ice Hockey Federation (SZĽH) for the next three years.

He won the election to determine the successor of Martin Kohut.

Šatan, who has been leading the national team programme at the SZĽH office, claimed he had been surprised how many votes he received in the election, winning with 229 votes to 99.

"It’s a big commitment for the coming period," he said.

"I’ve been working in Slovak hockey for two years and now I have three more ahead.

"I take it as a strong mandate because the other candidates had a lot more time to prepare.

"I decided to run only two weeks ago so I didn't have time for more agitation.

"I had met only three bigger groups.

"I had missed more in the pre-election period because we were burdened working for the [2019] World Championships."

The SZĽH chose Kohut as its President in June 2016 following a traumatic period for the sport in the country.

Kohut succeeded Igor Nemeček, who had only been re-elected in June 2015, at a special Congress organised to select new officials for the SZĽH.

He pledged to unify the Federation and improve relationships among all stakeholders in Slovak hockey.

Nemeček had agreed to step down in December 2015 and hold an election before the end of June 2016 following an agreement with Michal Handzuš, representing Slovak ice hockey players who were boycotting the national team.

The players had claimed that the SZĽH had become undemocratic under Nemeček, the former secretary general of the Federation, who had been elected President in 2011.

Following Nemeček's re-election, more than 50 Slovak players wrote an election warning they would not play for the national team unless he was replaced.

Handzuš had decided not to stand for President but the players backed Kohut, a member of the SZĽH Executive Committee, ahead of his only rival, Tibor Turan.

Šatan said Smatrala’s manifesto "scared" him, adding that there were certain things promised in it that he thought would have returned the SZĽH to the place where it was before the arrival of Kohut, who he claimed "recovered" ice hockey in the country.

He also welcomed the fact that Kohut and Handzuš are in the new Executive Committee.

"Michal has been working for the development of youth for a long time, even though he has no role in it," Šatan said.

"He is involved in various processes and is further than other candidates.

"I am glad he is in the Executive Committee."

The new Executive Committee met for the first time on Thursday (June 27) when Šatan embarked on his first mission.

"At the end of the summer, I want to visit every Slovak club with a vision that we have 80 to 90 per cent ready to agree on," he said.

"If they have objections, we are ready to discuss them.

"So a lot of work is waiting for us."

Šatan has worked as general manager of the Slovakia national team for past two years.

Before that, he had served as general manager of the Team Europe during the 2016 World Cup of Hockey in Toronto.

The biggest successes in Šatan's career were mostly in the national team with him being the only Slovak player to hold all the different-coloured medals from the International Ice Hockey Federation (IIHF) World Championship, winning gold in 2002, silver in 2000 and 2012, and bronze in 2003.

In 2009, he won the Stanley Cup with National Hockey League side Pittsburgh Penguins.

Šatan became a member of the IIHF Hall of Fame last month.

His and the other jerseys from the ceremony in Bratislava are being auctioned for charity.