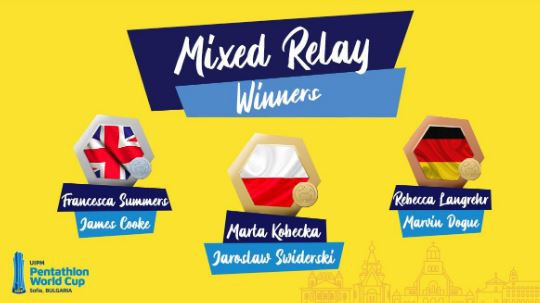 Silver went to Britain’s pairing of Francesca Summers and world champion Jamie Cooke, while Rebecca Langrehr and Marvin Dogue of Germany clamed bronze in the second World Cup of the 2019 season.

“I’m very surprised to win gold, but the mixed relay is a great event and I feel good doing this kind of competition,” said Kobecka.

“We started the fencing tournament with a 50-50 record but we really improved that and ended up with plus eight and that was very good for us.”

Her partner, Swiderski, added: “The key for us was very good shooting and nice running.

“Fencing is very difficult for me, but today was okay.”

Cooke said: “It’s been good fun here with Frankie – we had a really good swim and then she carried me through the fencing, we both had a good ride and then a good laser run, too.

“There has been a really good diversity of nations taking part in this mixed relay – we had a team from Thailand for the first time and to have a record number of 22 entries was fantastic.

“Competition is really strong in our team and the team spirit is strong, too.

“We are all aiming to do well in the European Championships in Bath in August.

“Going into an Olympic qualifying year, it’s an individual sport so there is rivalry between us, but it’s a fantastic squad and we support each other as well as competing against each other.”

Summers said: “I’m really happy that all the hard training paid off today and I’m looking forward to the rest of the season.

“There were so many people to compete against from the 22 teams. I’m hoping to build on this form and I'm looking forward to the European Championships.”

“It’s a very good feeling because before the laser run we were not expecting a medal,” said Dogue.

“We were hoping to hold on to fifth place or maybe improve on that, so it’s very amazing.

“There were many ups and downs today.

“I was swimming next to Jamie Cooke, the best swimmer, but it was a solid swim and we are both good fencers, but today was a struggle and we only had a 50-50 record.

“We went to the riding and wanted two clear rounds and apart from a couple of time penalties we got that.”

Langrehr said: “It was a very tough race and everyone was sprinting in the first round, I was dying!

“But the last shooting went well and I was able to hand over to Marvin in fourth place.”