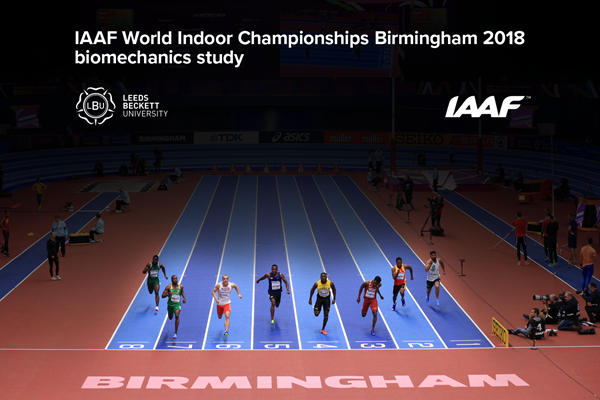 The International Association of Athletics Federations (IAAF) has released the results of an extensive biomechanics study conducted during last year's World Indoor Athletics Championships in Birmingham.

The study, conducted in partnership with Leeds Beckett University and followed a larger study at the 2017 IAAF World Championships in London, saw 25 academics, technical staff and students spend more than 1,500 hours analysing more than 650 videos.

"We have again deployed three-dimensional motion techniques to analyse key events, building upon what we learned in London 2017," lead researcher Athanassios Bissas said.

"We have refined these techniques and the data captured illustrates what we can learn when science is applied.

"It is fascinating and remarkable at the same time.

"We believe our findings will again excite the athletics community."

The project was the first to capture the mechanics of a 60 metres sprint start in three dimensions by using 11 high speed cameras.

It was also the first project to capture in detail the first 10m of the 60m finals, which revealed that five of the six medals awarded were decided within the first 10m.

Marie-Josée Ta Lou, who won silver for the Ivory Coast in the women’s final, was the only athlete to make the podium having been outside the top three at the 10m mark.

"These biomechanics studies have given us all a fresh and fascinating insight into the extraordinary performances of our athletes, and reflect the IAAF’s drive towards innovation and technology that can help us showcase athletics in new and exciting ways for all our followers," IAAF President Sebastian Coe said.

"I’m sure coaches the world over will be examining these reports closely for knowledge they can use to enhance their training programmes and develop their athletes.

"I commend the IAAF Development Department and the team at Leeds Beckett University for their exceptional work in producing both the Birmingham 2018 and London 2017 reports, which have contributed significantly to our understanding of high performance."

A total of 38 separate reports created from the original 2017 study have been downloaded across 204 countries more than 12,700 times, which the IAAF claims underscores the demand for such data.