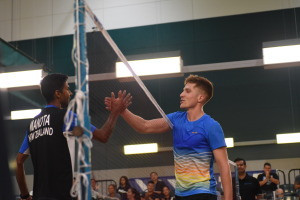 Ross avenged his defeat to the New Zealander in the 2018 title decider with a 21-10, 21-18 victory at the Melbourne Sports and Aquatics Centre.

Oscar Guo of New Zealand awaits for Ross in the final after he beat Australia's Keith Edison 21-16, 22-20 in the other last four encounter.

Ross will aim to become the first player from outside of Australia or New Zealand to win the men's gold medal.

Your Open Individual finalists have been confirmed! 🏸

Check out the highlights and meet the finalists who will compete for gold tomorrow ➡ https://t.co/2Nsmt6ygci#VOC2019

"My plan was to move faster than Abhinav and take the shuttle as early as possible as he can be an extremely deceptive player," said Ross.

"This will be my third time playing in the final and I hope to take home the gold medal this year."

Chen, who was born in Taiwan but represents Australia, made light work of Fu with a comfortable 21-15, 21-9 win.

Her opponent in tomorrow's final will be comptriot Yingzi Jiang, who defeated second seed and team-mate Louisa Ma 21-19, 21-14.