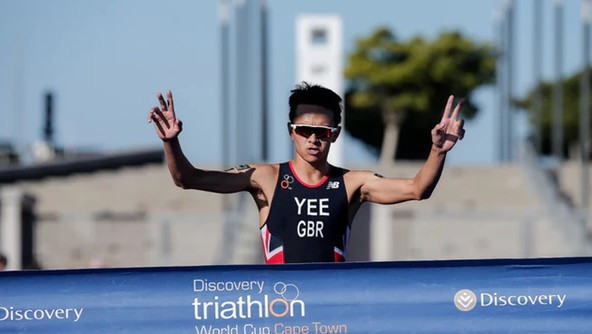 Home hopes of success had taken a blow prior to the race when defending men’s champion Richard Murray was forced to withdraw through illness.

The group stayed together until the final transition, with Yee emerging fastest and heading out onto his favoured run leg of the event.

He pushed clear of Schoeman to open up a strong advantage as they raced two laps of a 2.5km run circuit.

Yee crossed the line in a winning time of 52min 04sec to win the first major event of the season.

Schoeman slipped back in the closing stages to miss out on a podium in fourth position.

He was overtaken by the United States’ Tony Smoragiewicz and Portugal’s Joao Silva, who claimed the silver and bronze medals after they both crossed in 52:19, the former edging the photo-finish.

Ueda emergedthe winner of the women’s race in similar style to Yee after she broke clear on the run section.

The Japanese triathlete went solo during the 5km run to secure victory in a time of 57:23.

She finished with an eight-second cushion over the United States’ Summer Rappaport, formerly Cook.

The American was joined on the podium by her compatriot Tamara Gorman, who finished in 57:44.