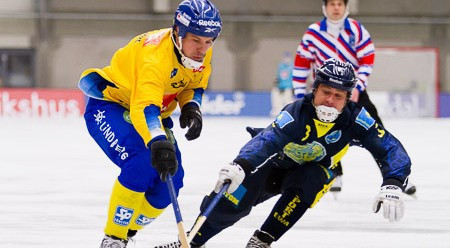 Defending champions Russia and hosts Sweden will meet in the final of the Bandy World Championship after both countries came through their last-four encounters in Vänersborg today.

The match, scheduled to take place tomorrow, will be a repeat of the 2018 gold medal match when Russia beat Sweden 5-4.

The two teams met in the opening game of this year's competition with Sweden defeating Russia 6-4 in Group A.

Russia were the first team to reach the final, overcoming Finland 6-2.

Finland had taken the lead through Markus Kumpuoja after eight minutes.

Their second goal, which came courtesy of Jimi Heinonen, had made it 2-2 in the 37th minute before Russia pulled away.

Later in the day, Sweden thrashed Kazakhstan 20-1 to book their spot in the final.

Finland and Kazakhstan are scheduled to contest the third-place playoff tomorrow, prior to the gold medal match.