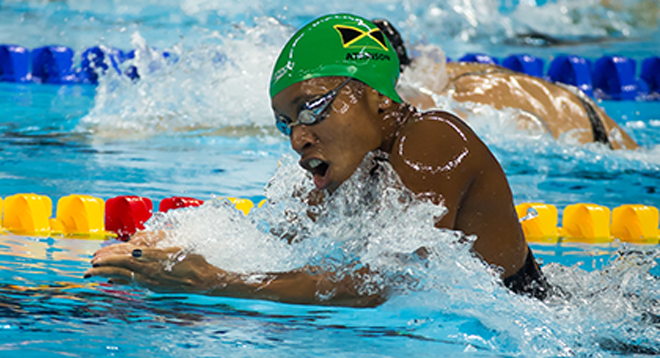 Such is the high standard of swimming on show at the International Swimming Federation's World Short Course Championships in Hangzhou, after four days of action today was the first not to feature a world record.

Seven gold medals were awarded at the Hangzhou Olympic and International Expo Centre with seven different countries picking up the top prize.

Then on top of that there were also golds for Jamaica's Alia Atkinson and Olivia Smoliga for the United States.

The first individual gold of the day went to Hosszú in the 200m individual medley, who finished in 2mins 3.25secs for her third consecutive title.

The silver went to the US through Melanie Margalis in 2:04.62 while her team-mate Kathleen Baker took bronze in 2:05.54.

While there were no world records today, a new Championship best was set in the men's 50m fly, where Brazil's Santos shot into the pool and maintained his pace to win in 21.82.

The world record holder in the distance beat Le Clos' previous Championship best of 21.95, with the South African finishing second.

He touched the wall just slower than his previous record in 21.97, while Trinidad and Tobago's Dylan Carter won the bronze in 22.38.

That was only the second ever medal for the Caribbean nation after another bronze back in 2012 from George Bowell.

The sole US win of the day came in the women's 50m backstroke final, where Smoliga claimed gold in 25.88.

The 24-year-old, who had already won the 100m backstroke earlier this week, triumphed in front of Caroline Pilhatsch from Austria who finished in 25.99 and Australia's Holly Barratt, who finished third in 26.04.

Before the freestyle leg he was well below the mark, but lost some energy on the final leg and eventually finished in 3:56.43.

That time was still enough for his fourth consecutive title in the event, however.

Silver went to Thomas Fraser-Holmes from Australia in 4:02.74, while bronze was won by Brazil's Brandonn Almeida in 4:03.71.

Jamaica's Atkinson won her third medal of the Championships with her 1:03.51 victory in the 100m breaststroke.

She finished just in front of Katie Meili from the US who touched the wall in 1:03.63, while Australia claimed bronze through Jessica Hansen in 1:04.61.

Russia claimed their relay gold in the men's 4x50m medley with a time of 1:30.54, just a tenth of a second behind their own world record.

The quartet of Kliment Kolesnikov, Oleg Kostin, Mikhail Vekovishchev and Evgeny Rylov beat the US and Brazil in the battle for gold, the US finishing in 1:30.90 while Brazil touched the wall in 1:31.49.

Lastly the women's 4x200m freestyle was taken in a thrilling finale by the home team from China.

Australia led for much of the race but were caught by Zhang Yuhan on the third leg, with China then holding on until the end.