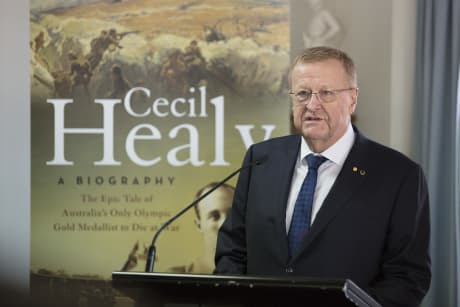 The book - Cecil Healy - A Biography - has been written by John Devitt, himself an Olympic gold medallist.

Healy was a freestyle swimmer who competed at the 1912 Olympic Games in Stockholm.

Healy and his team took the gold medal in the 4x200 metres freestyle relay, but it was his individual event where Australia first saw a glimpse of the young Olympian’s humble and gracious nature.

Due to swim against gold medal favourite Duke Kahanamoku of the United States, Healy had resigned himself to the fact that he would come second to the Hawaiian surfer in the finals.

Due to logistical issues, however, the US team were disqualified from the race, therefore offering Healy the gold on a platter.

Healy believed a victory without Kahanamoku involved would be empty, so the Australian team lodged a successful protest and the race went ahead with Kahanamoku winning the gold medal and Healy the silver.

After the race, Kahanamoku raised Cecil’s arm, praising him as "a true Olympic champion".

"In terms of sportsmanship, we’ve always looked at John Landy," Coates said at the book launch in Sydney.

"In 1956 he was competing in the mile, running behind Ron Clarke.

"Clarke tripped and Landy came over the top and spiked him.

"He turned back to check on Clarke, losing about seven seconds in the process.

"Ron urged him to keep going, so he did, but if he didn’t give up those seven seconds, he would’ve broken the world record.

Last year, Devitt, like Healy an Olympic gold medallist in the 4x200m freestyle at Melbourne in 1956 and the 100m freestyle at Rome 1960, was approached by Manly Aquatic Centre, who wanted to name their new eight-lane indoor lap pool after him.

He insisted, though, it be named after Healy too.

Devitt, who wrote the book with Larry Writer, described Healy as someone who was "always concerned for his fellow man.

"He was such a great person and that is what grabbed me."

Healy was killed in August 1918 just 74 days before World War One ended.

He was shot and killed while leading his troops in France.

"By Healy’s death, the world loses one of its greatest champions, one of its best men.

"Today in the four years I have been at the front, I wept for the first time."

Devitt’s has visited Healy's grave in France with a special gift from Manly beach.

"Being able to stand in front of Cecil’s grave and sprinkle sand from Manly beach, had been 50 years in the making," he said.

"Just to stand there and look down, knowing I had the opportunity to be there, was just a magic moment."