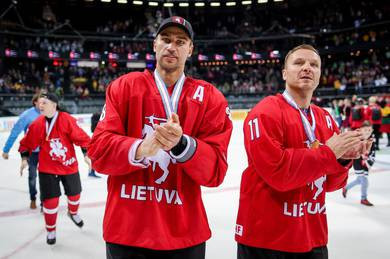 Dainius Zubrus, the Lithuanian who played more than 1,000 National Hockey League (NHL) games in a career that ended this year, has been elected as President of his national ice hockey federation - Hockey Lietuva - at what is a vital stage in its development.

The successful hosting of the 2018 International Ice Hockey Federation's (IIHF) World Championship Division I Group B allowed Hockey Lietuva to create a financial reserve, and the national team - with 40-year-old Zubrus making his swansong - responded in the best way by earning promotion.

The Lithuanians will now play Belarus, South Korea, host Kazakhstan, Hungary and Slovenia at the 2019 IIHF Ice Hockey World Championship Division I Group A in Astana next spring.

At the General Assembly Zubrus and another former national team player, Petras Nauseda, were the only candidates for the Presidency, but Nauseda, who headed the organisation from 2010 to 2018, eventually withdrew his application.

Zubrus, who was unanimously elected, resides in Miami but will now travel to Lithuania more often.

He said in his candidacy speech that he wants a new approach and stressed the need to come out from the comfort zone.

Zubrus, who grew up in the Lithuanian town of Elektrenai, played 1,293 NHL games, and 106 post-season games, between 1996 and 2016 for the Philadelphia Flyers, Montreal Canadiens, Washington Captials, Buffalo Sabres, New Jersey Devils and San Jose Sharks.

Despite his busy NHL schedule, he also represented Lithuania in three IIHF Ice Hockey World Championship Division I events, first in 2005 when he spent the lockout season with Lada Togliatti in Russia, then two times successfully on home ice.

In 2014 in Vilnius, he was the scoring leader of the tournament and last spring in Kaunas Lithuania won gold at the 2018 IIHF World Championship Division I Group B to earn promotion to the Group A for next year.

It was also the first time the other former Lithuanian NHL player, Darius Kasparaitis, played for the team.

Both Zubrus and Kasparaitis are legends in their country and have been involved off the ice for years.

In the off season they ran camps and brought equipment to Lithuania and Zubrus has served as chairman for the youth league.