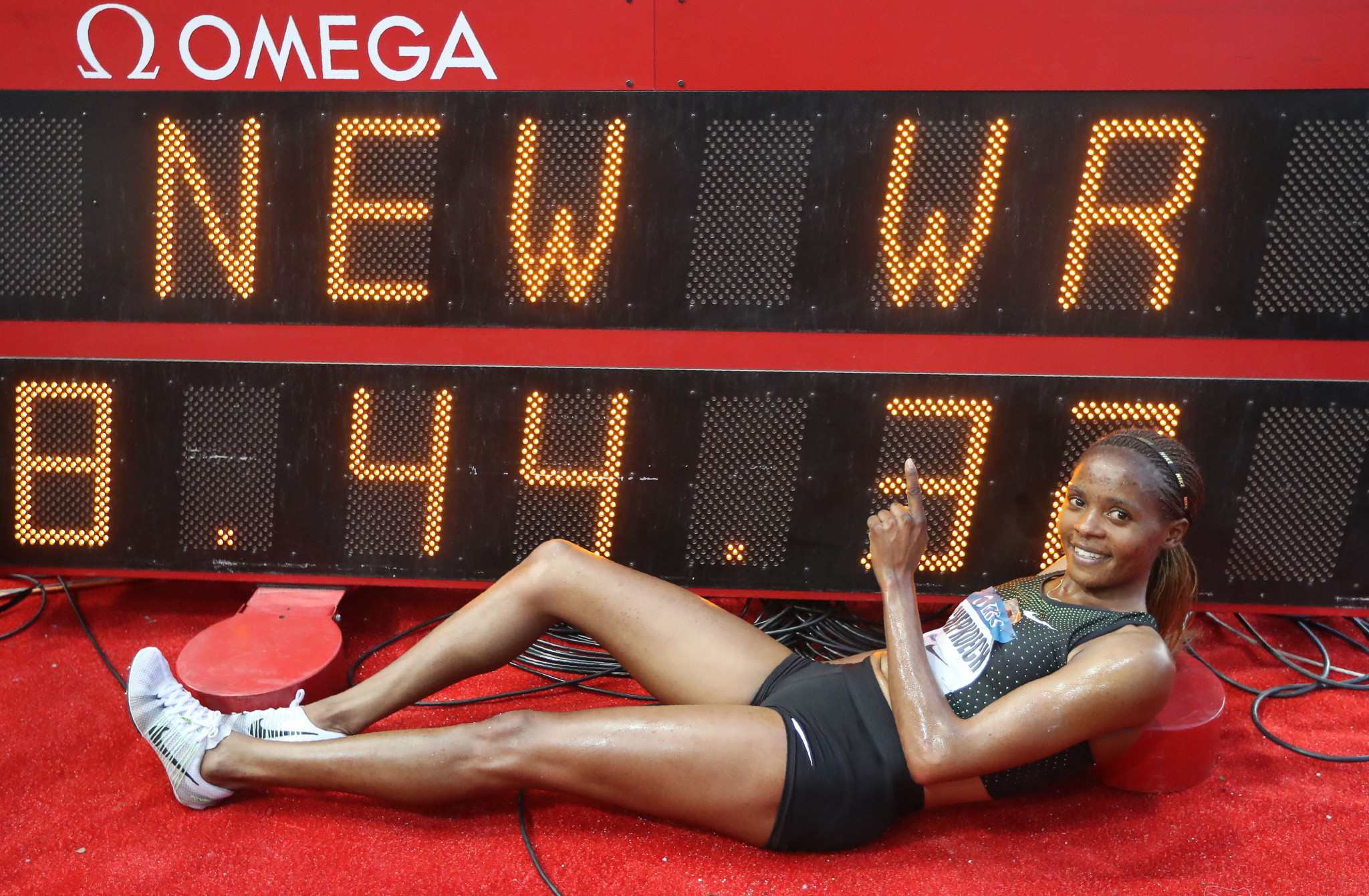 Olympic women's 400m champion Shaunae Miller-Uibo broke 49 seconds for the first time in her career in a compelling duel with Bahrain's rising 20-year-old phenomenon Salwa Eid Nasser, and Noah Lyles floated to another 200m victory in a personal best and meeting record of 19.65sec.

But Chepkoech's was the crowning performance of the tenth IAAF Diamond League meeting of the season as she took more than eight seconds off the women's world 3,000m steeplechase mark, coming home alone and triumphant after moving into the lead after 1000 metres.

Her time obliterated the mark of 8:52.78 set by Ruth Jebet, Bahrain's naturalised Kenyan, in winning the 2016 Paris Diamond League meeting.

Jebet was named today by the Athletics Integrity Unit among more than 100 athletes and coaches facing disciplinary proceedings for doping offences.

It also bettered the 8:58.78 set in Eugene last year by Chepkoech's 19-year-old compatriot Celliphine Chespol, who was a distant second with a couple of laps remaining  but slipped back to a tenth place finish in 9:12.05.

It was the fifth world record set at this gem of a meeting at the business end of the season.

The 27-year-old Chepkoech, who had come into this race with the fastest time of the season, 8:59.36, has never won a major global medal - missing a water jump and having to run back during last year's World Championship final hardly helped her chances - but she gave an indication of her sharpness this season by winning silver in the Gold Coast Commonwealth Games 1,500m final.

She was clear of the field with three laps remaining as the rising tone of the commentary highlighted the growing possibility of a monumental performance that was duly delivered.

"I wanted to break the world record, that was the plan from the beginning of the season," said Kipkoech.

"And I was aware the biggest chance would be at Monaco due to weather, crowds and the whole environment.

"And this plan worked well.

"I felt strong during the race.

"And this time still could be improved I'm sure.

"It is a great feeling I brought back to Kenya the steeple world record.

Behind her, Courtney Frerichs of the United States, surprise world silver medallist last year behind compatriot Emma Coburn, made the most of the fabulous pace by pushing to the line for second place in an area record of 9:00.85, with Kenya'’s 2015 world champion Hyvin Kiyeng finishing third in 9:04.41.

Miller-Uibo had to produce the fastest run of her career to hold off the challenge of Bahrain’s Naser.

And she did, setting a Diamond League and Bahamas national record of 48.97.

Her smaller opponent was second in 49.08, taking almost half a second off her own area record.

The first meeting of the season between Miller-Uibo, who has been concentrating mainly this year on the 200m, at which she has become Commonwealth champion, and the young woman who had won the four previous Diamond League meetings was always going to generate its own steam.

The 6ft 1in Bahamian, running in lane six, set off very fast and had passed Jessica Beard in the outside lane by the start of the backstraight.

But as she turned into the final straight the small, smoothly balanced figure one lane inside her had remained obstinately in touch - and so it remained all the way to the line.

Miller-Uibo had surpassed herself, smashing the personal best of 49.44 in which she had catapaulted herself over the line to take the Rio 2016 title ahead of Allyson Felix of the US.

The strain was more clearly written on Naser, who sank to her hands and knees in the aftermath.

She had also surpassed herself, passing far beyond the previous season's best of 49.52 jointly held by Miller-Uibo and world indoor silver medallist Shakima Wimbley of the US, who was a distant third here in 50.85, with her compatriot, world champion Phyllis Francis, one place behind her in 51.05.

Lyles, meanwhiles, continues to float on as a rising sprint phenomenon in the post-Bolt athletics world.

The defending Diamond League 200m champion from Gainesville, Florida, who turned 21 on Wednesday (July 18), lowered his own personal best to 19.65, also a meeting record, as he easily defeated a field that contained Turkey's world champion Ramil Guliyev, who was second in 19.99.

Fleetingly, it looked as if there might be a second world record on the night as world and Olympic 800m champion Caster Semenya, face set with determination, dominated a world class field from gun to tape.

The South African crossed in the phenomenal time of 1:54.60 - a meeting record, and narrowly outside the area record of 1:54.25 she set in winning the Paris Diamond League meeting on June 30.

"It was just fantastic, only the last 100 metres were a little off for me," Semenya said.

The men's steeplechase race was of only marginally less quality than the record-breaking women's, and produced the unusual sight of two men contesting the race over the final lap, neither of whom were Kenyan.

Having taken the bell together, Morocco's world silver medallist Soufiane El Bakkali and Rio 2016 silver medallist and world bronze medallist Evan Jager of the US were separate figures by the end of the back straight as the Moroccan athlete pushed on.

The men's 1,500m also produced running of breathtaking quality as the man who has had a long winning run this season, Kenya's Timothy Cheruyiot, drove to the line in a personal best time of 3:28.41 that improved on his own 2018 world best performance.

The high jump, lacking the injured Qatari world champion Mutaz Essa Barshim, nevertheless witnessed a 2.40m clearance as world silver medallist Danil Lysenko, competing as an Authorised Neutral Athlete, rose to the occasion after winning the event with a first-time clearance of 2.33.

Marie-Jose Ta Lou of the Ivory Coast won the women’s 100m in 10.89, clear of her fast-starting compatriot Murielle Ahoure, the world indoor champion, who clocked 11.01.

World and Olympic triple jump champion Christian Taylor of the US beat his Cuban rival Pedro Pablo Pichardo with a best effort of 17.86m.