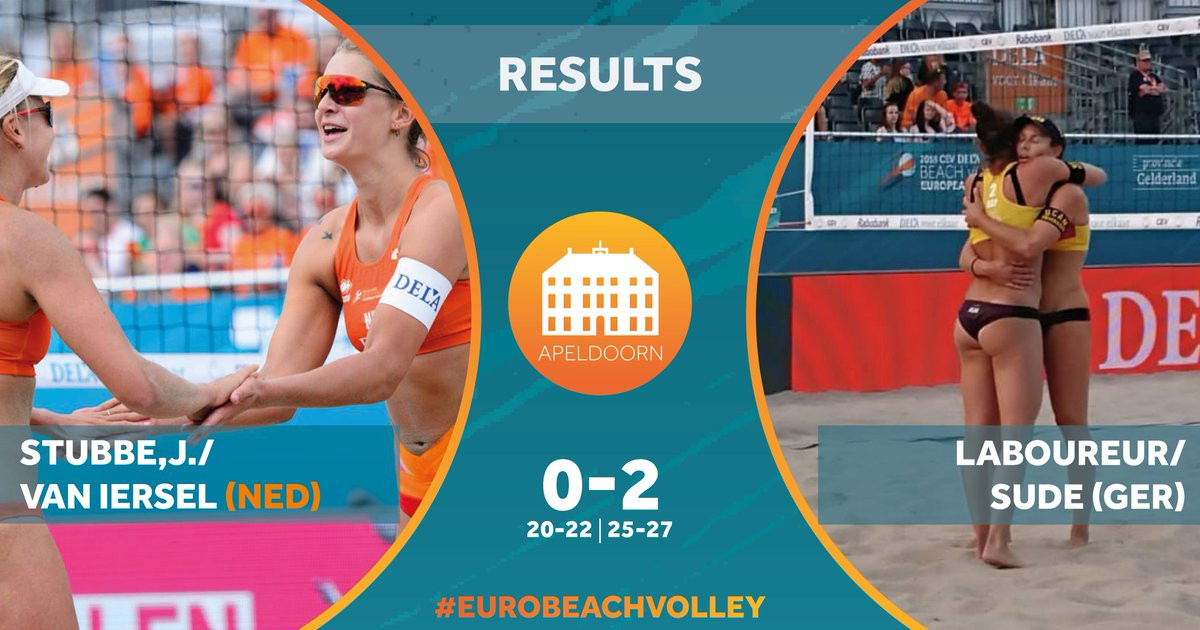 Top seeds Julia Sude and Chantal Laboureur beat home duo Marleen Ramond-van Iersel and Joy Stubbe today to progress through to the women's quarter-finals at the European Beach Volleyball Championships in The Netherlands.

The German pairing triumphed 22-20, 27-25 in Apeldoorn to set up a last-eight encounter with Spain's Liliana Fernández Steiner and Elsa Baquerizo McMillan, 21-14, 21-13 winners over Czech Republic's Martina Bonnerová and Sarka Nakladalova.

Sude and Laboureur had earlier defeated Finland's Taru Lahti-Liukkonen and Anniina Parkkinen 24-22, 22-20 in the round of 24.

Second seeds Barbora Hermannová and Marketa Slukova of the Czech Republic are also through to the quarter-finals after overcoming Finland's Riikka Lehtonen and Niina Ahtiainen 21-10, 21-11.

Next up for them are Russia's Ekaterina Birlova and Evgenia Ukolova, who beat Dutch duo Jolien Sinnema and Laura Bloem 21-18 18-21,15-8.

Hosts The Netherlands will be represented in the quarter-finals by Sanne Keizer and Madelein Meppelink thanks to their surprise 21-16, 21-14 victory over third seeds Zoé Vergé-Dépré and Anouk Vergé-Dépré of Switzerland

Standing between them and the last eight are Spain's Amaranta Fernández Navarro and Angela Lobato Herrero, 21-17, 21-17 winners at the expense of Germany's Kim Behrens and Sandra Ittlinger.

The one other quarter-final pits fourth seeds Victoria Bieneck and Isabel Schneider of Germany against fifth seeds Tanja Hüberli and Nina Betschart of Switzerland.

The quarter-finals are scheduled to take place tomorrow.

In the men's event, defending champions Paolo Nicolai and Daniele Lupo qualified for the round of 24 despite suffering a second defeat in as many days in Utrecht.

The top-seeded Italians finished third in Pool A after losing 21-18, 14-21, 12-15 to Czech Republic's Ondrej Perusic and David Schweiner.

In order to reach the round of 16, they must find their way past Switzerland's Adrian Heidrich and Mirco Gerson, the Pool D runners-up following a 21-19, 21-16 win over The Netherlands' Dirk Boehlé and Steven van de Velde.

Perusic and Schwiner ranked second in Pool A behind Switzerland's Nico Beeler and Marco Krattiger, who themselves lost to Serbia's Lazar Kolaric and Stefan Basta 21-14, 17-21, 13-15 today.

Second seeds Alexander Brouwer and Robert Meeuwsen secured first place in Pool B and a straight passage through to the round of 16 after the Dutch pairing made it three wins out of three with a 21-14, 30-28 triumph over Poland's Maciej Rudol and Kacper Kujawiak.

Brouwer and Meeuwsen will face the winner of the round-of-24 match between third seeds Clemens Doppler and Alexander Horst of Austria and France's Quincy Aye and Youssef Krou.

The round-of-24 ties are scheduled for tomorrow along with two of the eight round-of-16 clashes.