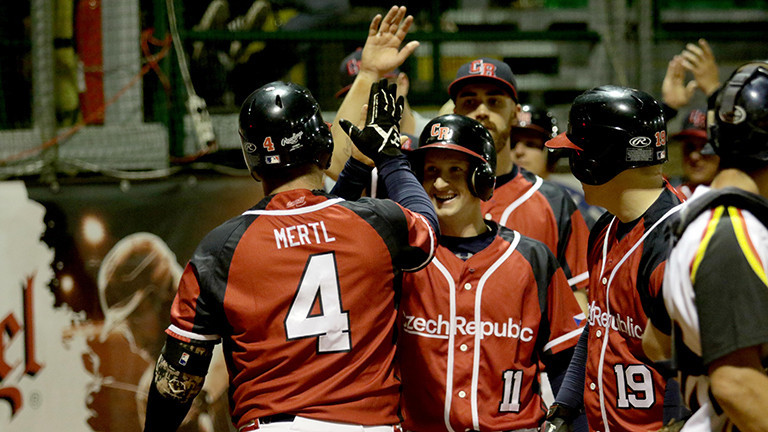 Hosts Czech Republic have continued their title defence at the Men's European Softball Federation European Championships with another two emphatic wins over Lithuania and Germany in Group A on a day that saw four teams play three times following yesterday's rain.

The Czechs have won all their matches so far with an overall score of 64-4 at the tournament being held at the Hippos Arena in Havlíčkův Brod.

They beat Lithuania in their first match today 19-0.

First on was Germany versus Italy, also in Group A.

That match was a close one, with the Germans eventually triumphing 5-4, before Denmark cruised past The Netherlands in their first of three games in Group B, 15-0.

That match was initially supposed to go ahead yesterday only to be postponed due to heavy rain.

Next up was another rescheduled match in Group B, Sweden versus Israel.

Sadly for the Swedes the game ended in other loss for them, though they did score their most points of the tournament so far, losing 15-2.

Great Britain then beat Belgium by one point in Group A 5-4, having lost by one point against the Czech Republic in the last match yesterday.

Another rearranged match then came in the form of Croatia versus Slovakia, ending 9-2 to the Croats.

Denmark then won their second game of the day, again comfortably, 10-0 against Israel.

Croatia could not follow up their win of the day over Slovakia as they then lost to the Netherlands 9-8, while in contrast, Belgium bounced back from their defeat to Great Britain with a win over Italy 5-3.

The Netherlands then beat Israel in their third and final match on Wednesday in Group B.

That finished 10-0, with hosts the Czech Republic then beating Germany 14-1 in their second match today.

Demark and Slovakia were supposed to play each other today after their match up yesterday was postponed for rain, but their match was cancelled again today.

It is not clear when their game will be replayed, or indeed if it will be, as the knock-out rounds are due to begin tomorrow morning with Great Britain drawn against The Netherlands.