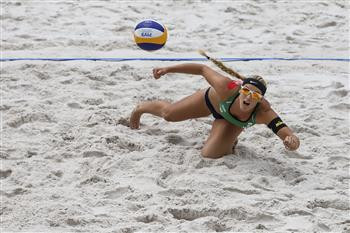 The line-up for the last-16 was decided today after the concluding group games and elimination matches at the International Volleyball Federation's Beach World Tour event in Ostrava.

While some pairs won their groups and went straight through to the first full knock-out round, others had to endure play-off matches today to book their place.

Two all-American clashes caught the eye in the women's draw in the Czech Republic.

Sixth-seeded Sara Hughes and Summer Ross came through a titanic clash with Kerri Walsh Jennings and Nicole Branagh which lasted just short of an hour.

Larsen and Stockman win all-US clash with Fendrick and Carico to advance to the second knockout round of the #OstravaBeachOpen on the #BeachWorldTour...#beachvolleyball @USAVBeach pic.twitter.com/yk2lMbMpbj

"Kelley and I are a new team and we are getting better every time we step on the court, so it's really exciting."