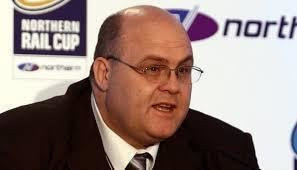 The Rugby League International Federation (RLIF) have announced that Nigel Wood has begun his tenure as the organisation's new chief executive following his appointment in January.

Wood, who was formerly chief executive of the Rugby Football League and the Super League, has taken up the role following the retirement of former chief executive David Collier on May 31.

Following his appointment, Wood said: "I believe international rugby league represents a great opportunity for our sport and I am looking forward immensely to working with all stakeholders in delivering its tremendous potential.

"The RLIF now has relationships with in excess of 70 National Federations and there is more international rugby league being played now than ever before."

"The RLIF will work towards provide the right playing opportunities for each, in all genres of the sport, men's, women's and wheelchair.

"I would like to thank David Collier for his efforts to date.

"It is clear he has moved the organisation forward considerably during his tenure."

Wood also confirmed that the organisation are set to make two new appointments.

"The RLIF has recently interviewed for two new executive appointments; a southern hemisphere general manager and general manager of operations and we look forward to making positive announcements in this regard imminently," he said.

"These positions and others to follow will allow the RLIF to make a stronger contribution to all National Federations."