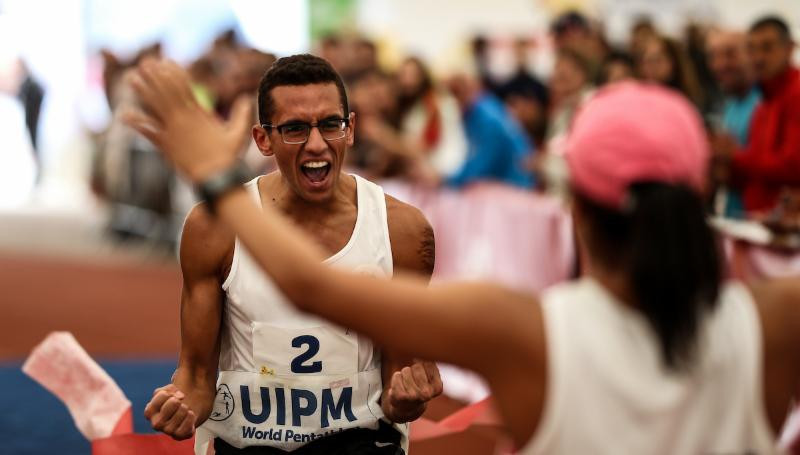 The silver medal went to France’s Emma Riff and Ugo Fleurot, while Russia’s team of Iuliia Sergeeva and Oleg Kupriyanov claimed bronze in the concluding final of the Championships contested by 20 nations.

For Elgendy it sealed a fantastic Championships as he added a second title to his men’s Individual crown, and made sure his country matched the performance of Italy in winning two gold medals.

Today’s confident performance reflected the strong form the Egyptians had shown all week in Portugal, where the biggest-ever gathering of teenage pentathletes had assembled, with more than 220 athletes registered to take part.

Twelve individual qualifiers were also confirmed for the 2018 Summer Youth Olympic Games in Buenos Aires thanks to their performances.

Egypt had a lot of catching up to do after fencing dominated by Poland’s Daria Niedzialkowska and Kamil Kasperczak, who had 28 wins and 10 defeats, adding two points in the bonus round.

Behind them, Egypt, Argentina and France were tied on 24/14.

Italy’s Beatrice Mercuri and Giorgio Malan were quickest in the pool by a slim margin.

Their time of 1min 55.12sec allowed them to narrowly edge ahead of Belarus and Egypt.

Poland started the Laser-Run with a 15 seconds lead over Egypt, with France a further four seconds behind, and Argentina two seconds behind them.

Abdelmaksoud took the initiative of overtaking when Niedzialkowska struggled during her first visit to the shooting range.

After the second shoot, Riff, of France, also overtook the Polish athlete and the main focus thereafter was on the destination of the bronze medal as Elgendy and Fleurot took over from their partners to protect their gold and silver medal places.

Russia got into the podium places at the third visit to the range, and Kupriyanov finished with a strong challenge to Fleurot.

But a perfect final shoot from Elgendy made it clear where the gold was heading.

Italy moved up to fourth, with Argentina fifth and South Korea moving up to sixth.

"I think the best performance was our laser-run," said Elgendy.

"I ran hard and we increased the gap from second place because of our running, and we are so happy about that.

"It’s a very interesting event, I like to play the mixed relay and it increased my medals in this competition.”

Rosa Mota, Portugal’s 1988 Olympic marathon champion, was a VIP guest at today’s event and paid tribute afterwards to the participants and the local organisers, led by Manuel Barroso, President of the Portuguese Modern Pentathlon Federation.

"It's an honour for me to be here at the World Championships in Caldas da Rainha," she said.

"I am very, very proud of the athletes who represented Portugal and did very well".

“I was watching the Portuguese athletes closely and I was very interested to see which of the athletes would qualify for the Youth Olympic Games, where I wish them all well."