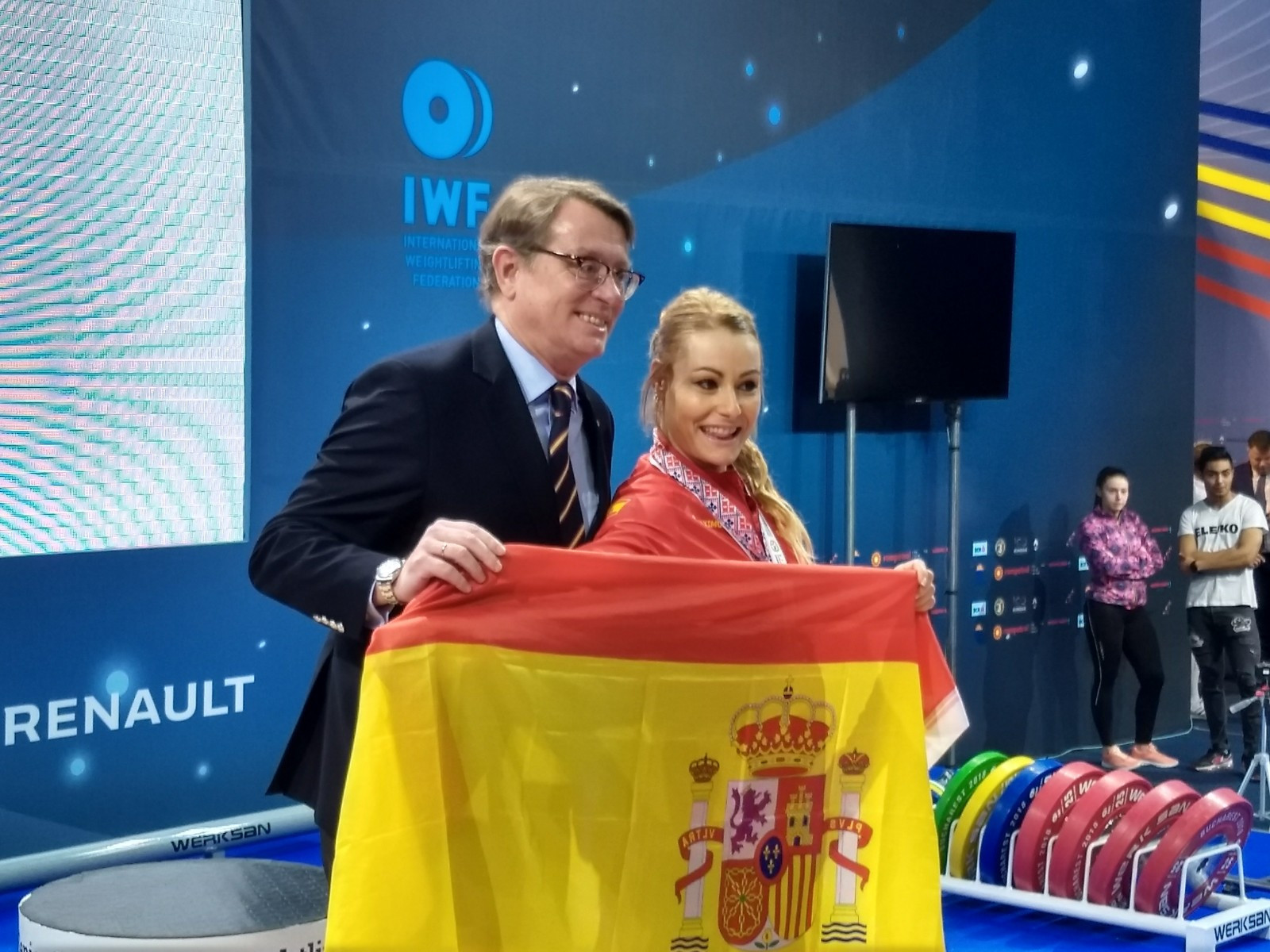 Lydia Valentin won Spain’s second title at the European Championships on a day when the Spanish Federation reiterated its desire to host the continent’s Junior Championships, which it could lose for political reasons.

Valentin, the International Weightlifting Federation’s (IWF) 2017 female athlete of the year, did not have to come to close to her best lifts for a clear victory in the 75 kilograms, totalling 250kg.

The male athlete of the year, Lasha Talakhadze of Georgia, is due to go for gold in the men’s super-heavyweight event tomorrow in the final event of the Championships.

The day's other gold medals went to Georgia and host nation Romania, whose 94kg lifter Nicolae Onica was cheered on by a full-house at the Olympic Complex arena.

Naelle Nayo Ketchanke of France had to settle for second place behind Valentin – again - on 234kg with the Finn Meri Ilmarinen, at 26 the youngest medallist, third on 223kg.

The Spanish anthem was played for a second time this week, after Josue Brachi’s victory in the men’s 56kg – Spain’s first male European champion.

While the men have struggled over the years for a nation which is clearly improving in terms of medals, recruitment and exposure, the women have excelled, largely thanks to Valentin, who is still going strong at 33 and aiming to compete at Tokyo 2020.

Before these Championships in Romania, Spain’s European senior record for men was three medals earned on total, compared to the women’s 47 - seven of them by Valentin, who took a record-breaking fourth title here.

Because of retrospective doping disqualifications, world champion Valentin was promoted to the Olympic silver medal in Beijing 2008, gold at London 2012, and named one of Spain’s three Tokyo 2020 ambassadors, from all sports, by Bridgestone, a top-level Olympic sponsor.

Her many successes have helped to promote weightlifting, attracting new recruits, sponsors, and an impressive audience for televised and live-stream coverage in Spain.

Hosting the European Junior and Under-23 Championships in October, in La Coruna, is a crucial part of Spain’s strategy to keep taking weightlifting to a wider audience, particularly among younger people.

"It is very important to us," said Constantino Iglesias, President of the Spanish Weightlifting Federation.

But it may not happen because the Spanish Government does not recognise Kosovo, a member of the European Weightlifting Federation (EWF).

Unless the Government can confirm within three weeks that visas will be issued to Kosovans, the EWF will take the Championships to another country, probably Poland.

"Now is the time for the European Federation to help us, as we have done all we can,” said Iglesias.

"We want Kosovo to come, we will welcome them.

"It is a political matter and this is sport, where togetherness is what matters.

"I have said all I can say in talking to our Sports Ministry many times."

The EWF has written to the Spanish Government to ask for guarantees that visas will be issued.

The IOC helped to persuade Spain to allow Kosovo to compete at the Mediterranean Games in Tarragona in June.

The first record breaker of the week was Georgia’s Anastasiia Hotfrid, whose snatch of 124kg in the women’s 90kg class was a European Under-23 best.

Hotfrid, 21, originally from Ukraine, also went for a world record of  131kg but just failed.

She was a clear winner, on 256kg, 30kg clear of the improving 17-year-old Austrian Sarah Fischer who, as usual, was supported by her brother, parents and grandparents.

Fischer’s personal bests of 101-125 left her one kilogram ahead of Poland’s Kinga Kaczmarczyk, who edged out snatch silver medallist Anna Vanbellinghen of Belgium for third place.

The men’s medal event, at 94kg, went to Onica, who made career best lifts of 171-210 to finish ahead of Stanulis Zygimantas of Lithuania, who had a six-from-six total of 374kg.

Lukasz Grela of Poland was only seventh best in the clean and jerk but held on for third place on total, on 357kg.

Onica was cheered on by his friend Ilya Ilyin, Kazakhstan's twice stripped Olympic gold medallist because of doping, who has been training in Romania this week.